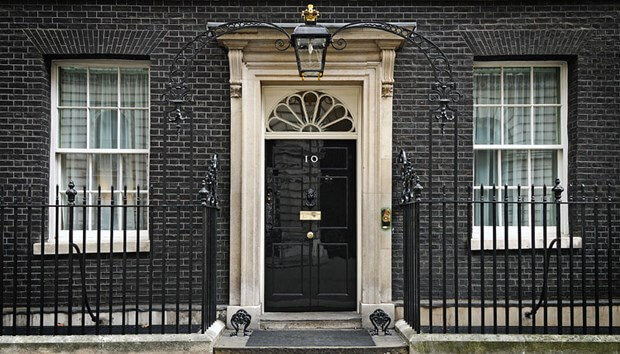 Your doors are important to your home. They prevent heat and air from escaping, improve your home’s curb appeal and protect you from intruders. However, some doors are important on a global scale. They are symbols of faith, tell stories for generations and are cultural icons. Our list of 10 world famous doors will take a deeper look into some of the most renowned doors and why they mean so much to society. 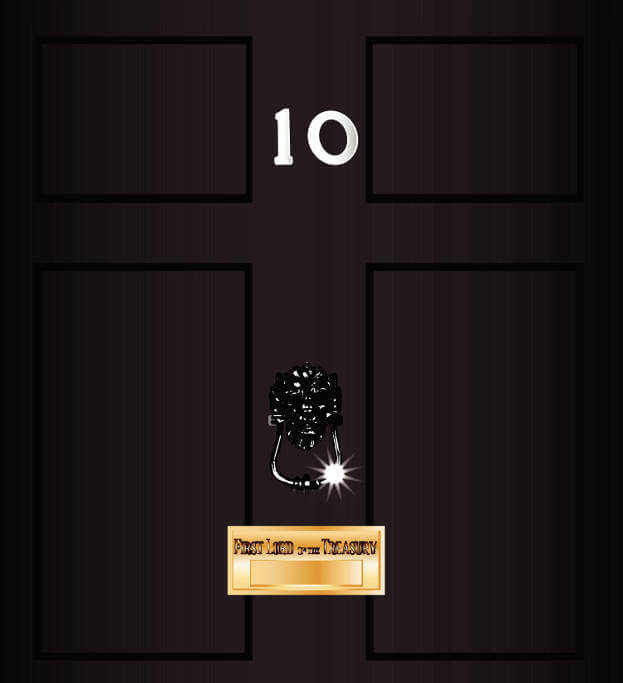 Located in the City of Westminster at 10 Downing Street, the Number 10 is the entrance to the headquarters of the executive branch of the British Government. It’s also where the Prime Minister of England lives.

The building features an all black door with an arched glass transom and white pillars on each side. In the upper center part of the door is a vibrant white 10. The door has appeared relatively the same since 1772, but has had one major change. In 1991, after the IRA mortar attack, the wood door was replaced with a blast proof steel door.

The Columbus Doors were made in Germany in 1855, but couldn’t be transported to the United States until 1863 due to the American Civil War. The bronze doors feature nine panels depicting Christopher Columbus’ life from 1487 till 1506.

The first panel is an image of Columbus before the Council of Salamanca in an attempt to convince King Ferdinand of his new route to India. The final panel shows Columbus on his deathbed. The very top is a transom depicting Columbus landing in the New World.

The Columbus Doors are now featured as the entrance to the Rotunda, which is in the heart of the U.S Capitol Building. 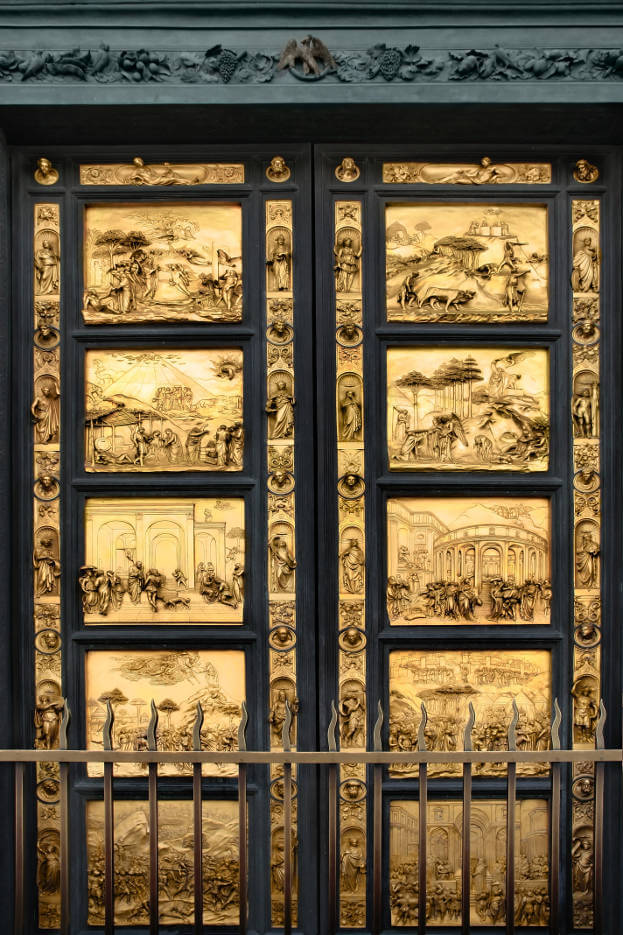 The Florence Baptistery, also known as the Baptistery of Saint John, are the oldest buildings in Florence. They were constructed between 1059 and 1128 and are well known for their large bronze doors that were deemed by artist Michelangelo as the Gates of Paradise.

The south doors were designed by Andrea Pisano in 1329. Originally located on the east side of the Baptistery, they were transferred to the south side in 1452. There are a total of 28 panels on the door. The top 20 panels depicted the life of St. John the Baptist while the lower eight represent the eight virtues (hope, faith, charity, humility, fortitude, temperance, justice and prudence).

It took Ghiberti 21 years to finish the north doors. Much like the south doors, there were a total of 28 panels of the door. The top 20 depicted the life of Christ from the New Testament while the lower eight showed the four evangelists and four saints (Ambrose, Jerome, Gregory and Augustine).

Ghiberti and his workshop were commissioned to do the east doors after his work on the north doors. The east doors took 27 years to complete. There were 10 panels which all show images from the Old Testament.

The entryway to the All Saints Church in Wittenberg wouldn’t be famous if it wasn’t for the actions of Martin Luther. On Oct. 31st, 1517, he wrote the 95 theses, a list of grievances against the Catholic Church, and nailed it to the door of the All Saints Church.  This was the catalyst for the Protestant Reformation.

In 1760, during the Seven Years’ War, the All Saints Church was destroyed in a fire from an attack. The wood door Martin Luther nailed the 95 theses to didn’t make it through the attack. The church was rebuilt and in 1858, a commemorative bronze door was built in the location the original door stood. 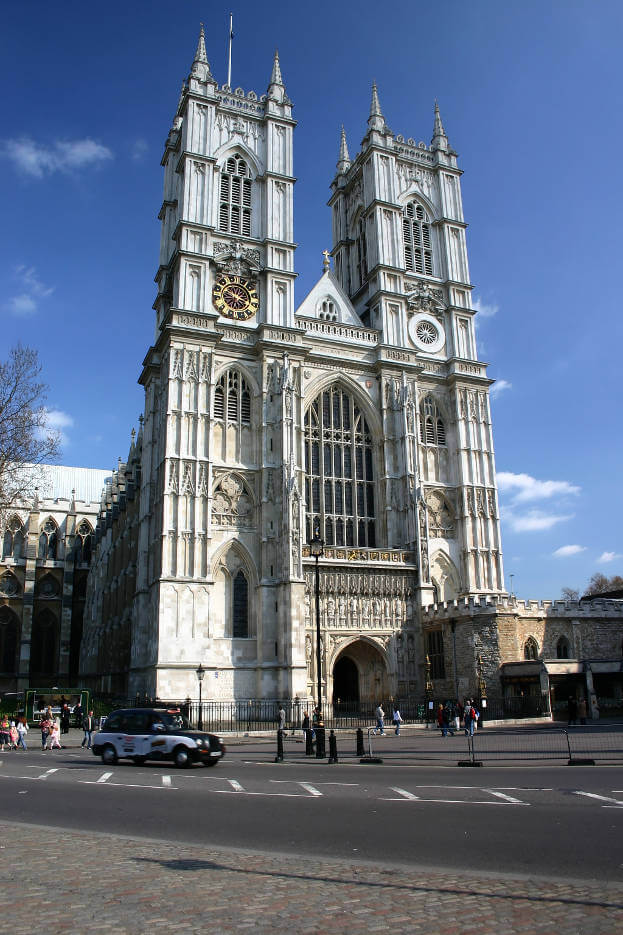 5. Entryway to the Westminster Abbey

The Westminster Abbey, formally known as the Collegiate Church of St. Peter at Westminster, is one of the most well known religious buildings in the United Kingdom. It is a location often used for coronations and burials of English/British Monarchs. There have also been 16 royal weddings since 1100. The doors have many interesting stories attached to their long history.

In the 19th century, people noticed there were fragments of hide stuck in the door. A legend formed suggesting that the hide was human skin! It was believed that in the Middle Ages, a criminal had his skin flayed and nailed to the door to deter felons.

The northern most entrance is known as the Holy Door. The door can only be opened by the Pope on Holy Years which is every 25 years (the next one will be in 2025). It represents the passing from this life into the presence of God. 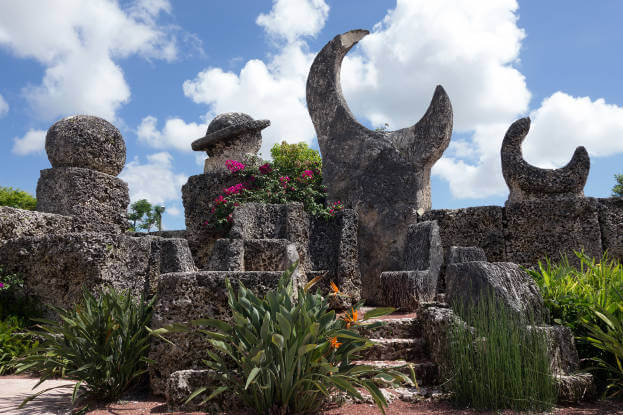 Coral Castle is located in Leisure City Florida and was constructed by Latvian immigrant Edward Leedskalnin. How the eccentric, 5’, 110 Ib. man was able to single-handedly move 1,100 coral is a mystery. The door also holds mysteries of its own.

The door to the Coral Castle is nothing more than a single coral block. At nine tons, 80” wide, 92” tall and 21” thick, it’s strange enough how it got there, but how it opens is even weirder. With the gentlest finger-tip push, the coral block swings open.

8. Doors to the Palmer House Hotel in Chicago

The original Palmer House opened on Sept. 26, 1871 and was built as a wedding gift for Potter Palmer. Unfortunately, 13 days later, it burned down in the Great Chicago Fire. Palmer constructed the second Palmer House which was deemed one of the world’s fanciest hotels.

If you enter from the Monroe Street side of the building, there are two large bronze doors with peacocks on them. They were designed by Louis Comfort Tiffany specifically for the Palmer House. These have been the same doors since the 1873 reopening. 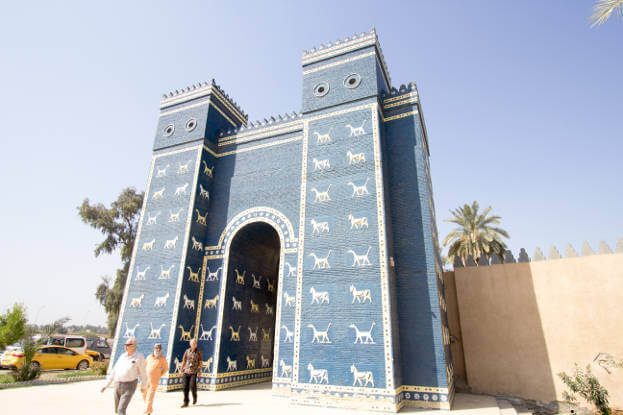 Ordered by King Nebuchadnezzar II in 575 BC, the Ishtar Gate was the eighth gate to the inner city of Babylon. It was dedicated to Ishtar, the goddess of fertility, love, war and sex. The gate was considered one of the original wonders of the world, but was replaced by the Lighthouse of Alexandria.

The gate is a deep blue with cedar roof and frame. On the door is an image of the dragon God Marduk. Surrounding Marduk are golden lions and bulls.

In the 20th century, the gate was reconstructed using its original bricks and is now found in the Pergamon Museum in Berlin. The original bricks were found in an excavation between 1902 and 1914.

The home stadium of the Minnesota Vikings, The U.S. Bank Stadium, is getting a major renovation for the 2016 football season. Even though the construction is still underway, the entryway to the new stadium is getting a lot of attention for its size.

The new glass doorway is being paraded as the largest operable door in the world. At 95 feet high, the doors will swing open to create a 350’ entrance. We can’t wait to see how it looks in 2016!

From doors in Chicago to the Ishtar Gate, there are many historic doors from around the world. There are doors that have religious, cultural or political impact on society. Some have fascinating stories passed from generation to generation and some have mysterious origins. As life is always changing and new history is being written, we’ll never know what will be the newest addition to our list of 10 famous doors from around the world.