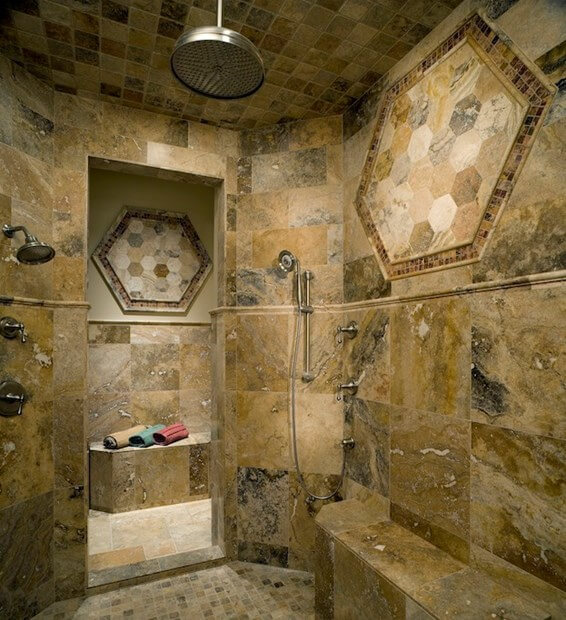 There is no better feeling in the world than coming home to a warm shower and having the water run along your face. Showers are supposed to be soothing. They are meant to make you forget work, soccer practice or reality TV. As such, given that the shower can do all the above, you better have the best shower head on the market.

Shower heads come in all shapes and sizes. Whether it’s a handheld, rainfall, dual or double shower head, it better take you to a place you can’t experience anywhere else in the home. The designs have greatly changed over the years and that is why I gathered 11 of the best shower head designs on the market.

If you're thinking about installing a new shower head, let us help you find reliable shower contractors near you! 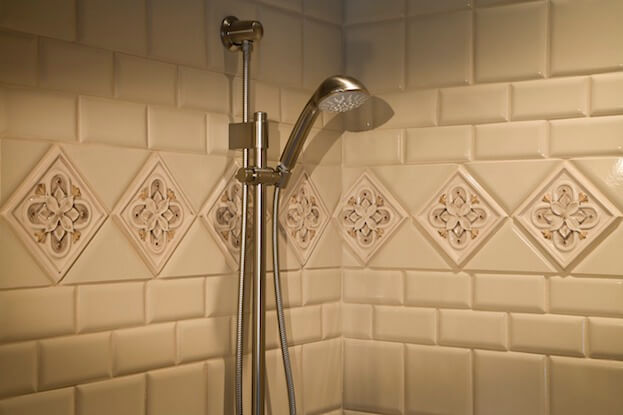 As you will see with the other shower heads mentioned in this article, many are made of chrome that give your shower the shiny and bright design all of us desire. This hand held shower head is part of a casual and comfortable shower surrounded by different sized tile. The shower head may have a small diameter, but homeowners can adjust the height while you wash your hair.

Thinking about upgrading or converting your tub into a more luxurious shower? See some of the costs involved with our shower installation cost estimator. 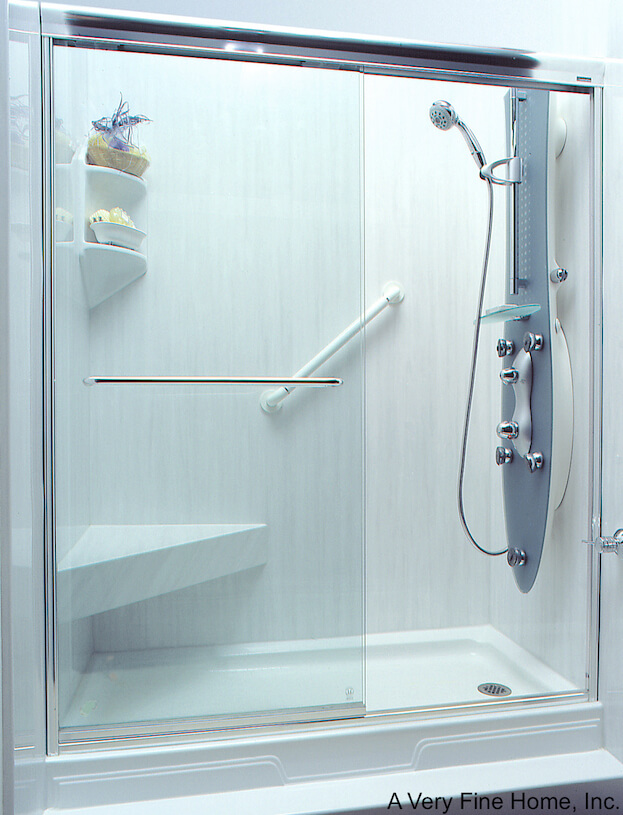 As you can see in our next handheld shower head, they are many updates you can implement to make sure your shower experience is up there with the best. The silver shower fixtures are part of a traditional bathroom that is covered in white wall coverings. The shower head comes with an adjustable height feature, as well as multiple shower panels below. With this shower head system, you surely won’t miss a spot. 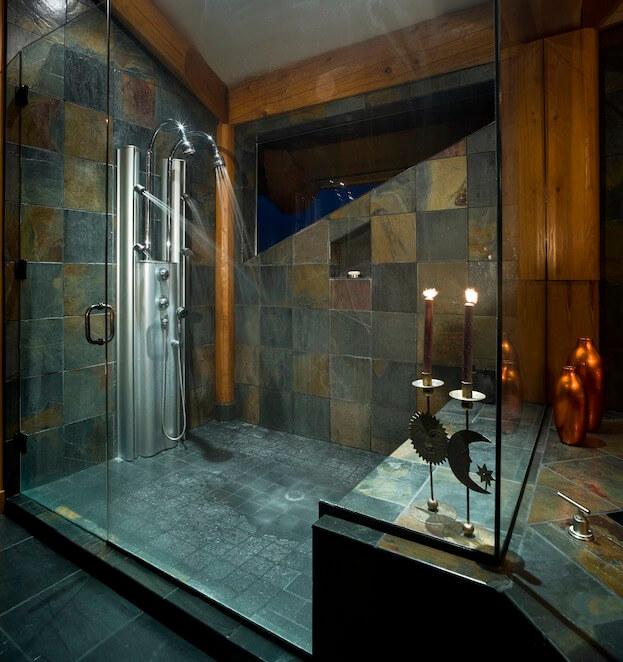 This is one of my favorite shower heads as the traditional beauty features dual shower heads, slate tile all around, extra panels below the shower heads and a frameless shower door. Clearly, this shower was designed for two people, but I doubt anyone would complain about the extra space if they go at it alone. 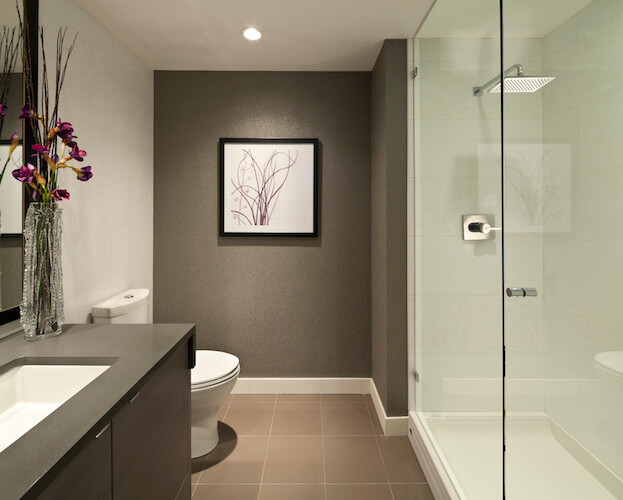 If there is one dominant theme in new shower design, it’s the idea of the rainfall shower. No matter where you look, more and more homeowners are asking for rainfall showers in their master bathrooms. After all, they are easy, relaxing and fast. 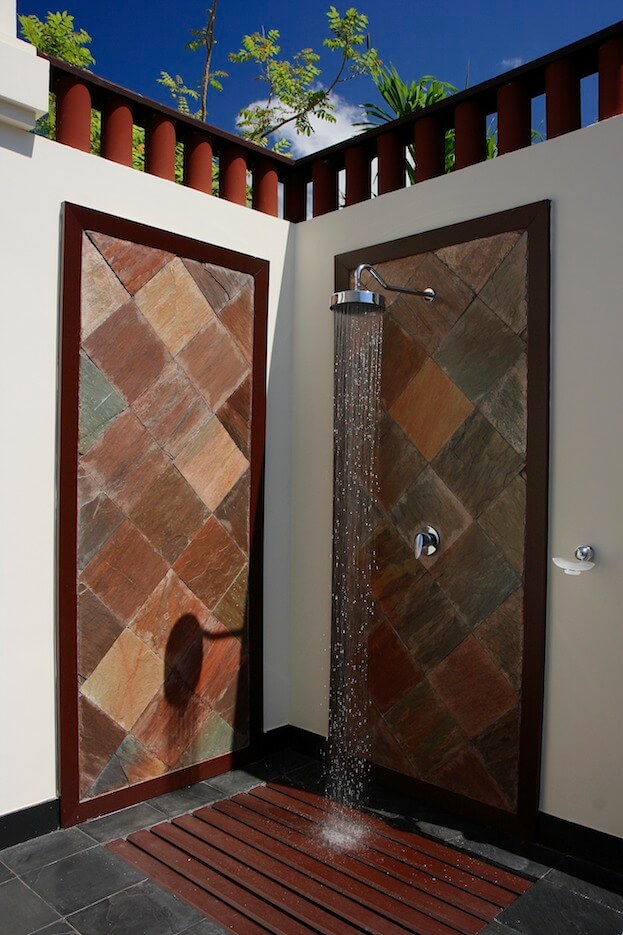 Outdoor showers are often used to remove dirt or sand, but even so, that doesn’t mean you have to sacrifice your design creativity. As you can see, if weather permits, your outdoor shower can look as good as any in America. 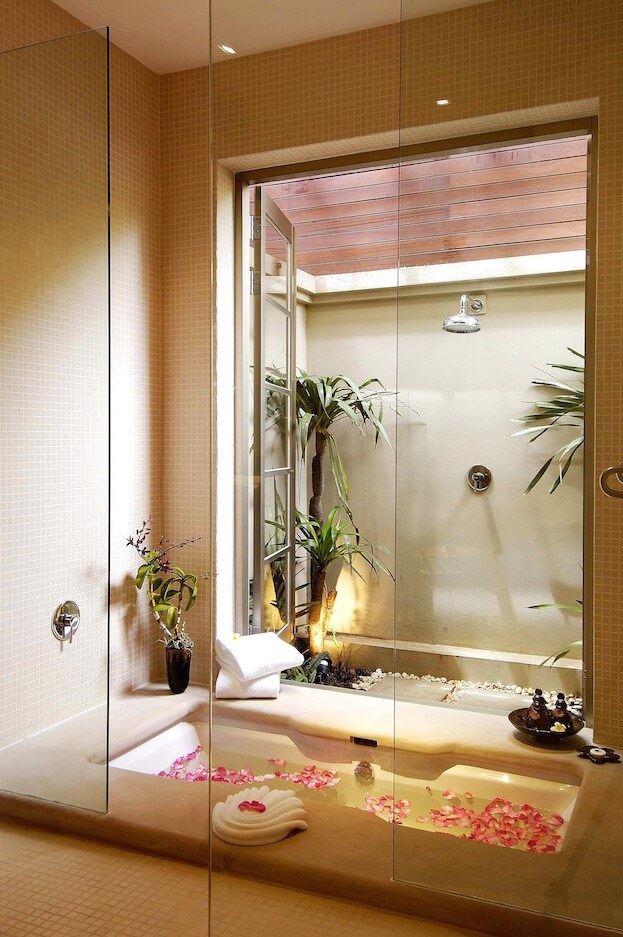 Now we are really stepping up our outdoor shower. These homeowners decided to go all out with an entire indoor-outdoor bathroom, complete with a luxurious inground tub, mosaic wall tile, glass doors, an outdoor shower with a stone floor and of course, a chrome, rainfall shower head.

No need to worry about privacy, as this outdoor shower is completely surrounded by a tall, stone wall and greenery. If you want to add an outdoor shower, make sure you know what plumbing costs come with it.

As you have read, there is no one shower head fits all. Many showers and bathrooms demand more and therefore, installed multiple shower heads in their newly remodeled bathroom. 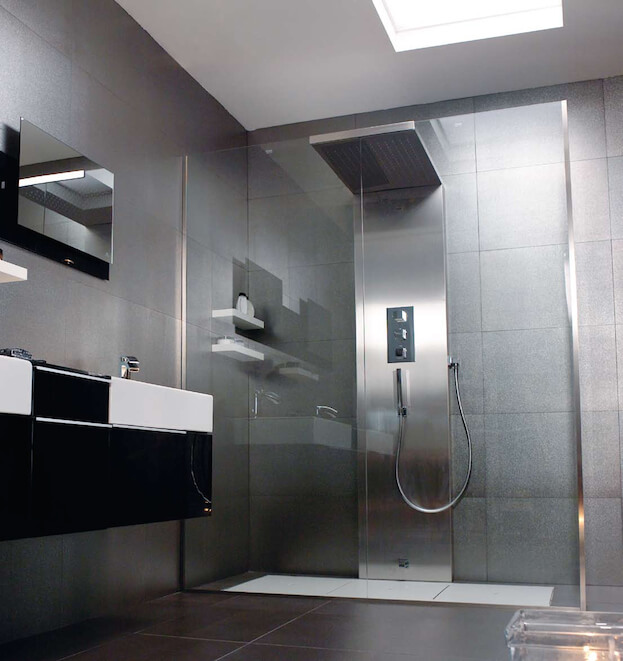 Shower heads and bathrooms do not get more contemporary than this masterpiece with the massive rainfall shower head above and a smooth, thin handheld shower head below. The bathroom also highlights smooth, gray wall tile, stainless steel all around, a floating sink and tile flooring.

No matter your design preference, when you turn this amazing shower on, you’re in for an unforgettable shower experience. 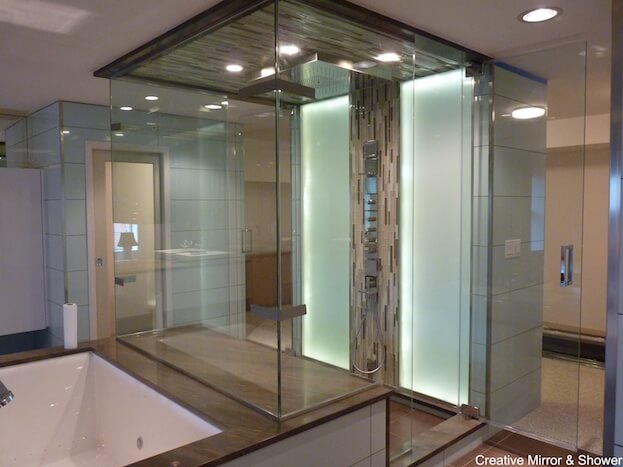 I understand the size of this massive shower will not fit for most of our fans, but the shower head system is one that can go in any master bathroom. Two rainfall shower heads, a handheld option and multiple panels right in front highlight this frameless shower. 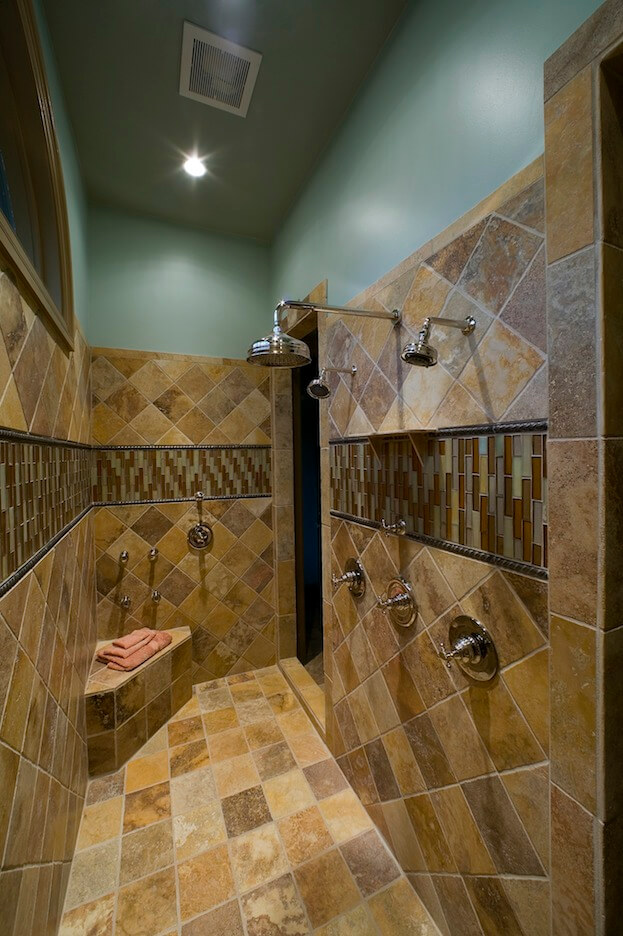 Many Americans don’t like to hold the shower head, but still want the experience of multiple water outlets. That is why this shower head combo is perfect with the wide rainfall shower above, dual shower heads on the side and a small shower head next to the corner seat. Despite the size of the smaller shower head, it would be hard to turn down those shower jets. 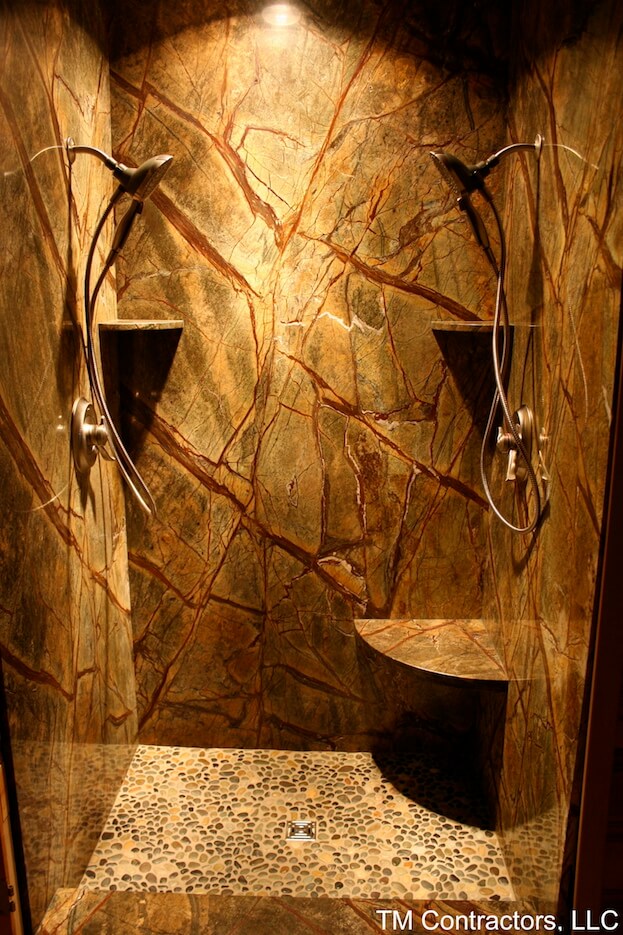 Dual, detachable shower heads made their way into this gorgeous shower remodel with marble shower walls, a rock shower floor and bronze fixtures all around. They added a small bench for comfort as well as multiple shower shelves for storage. 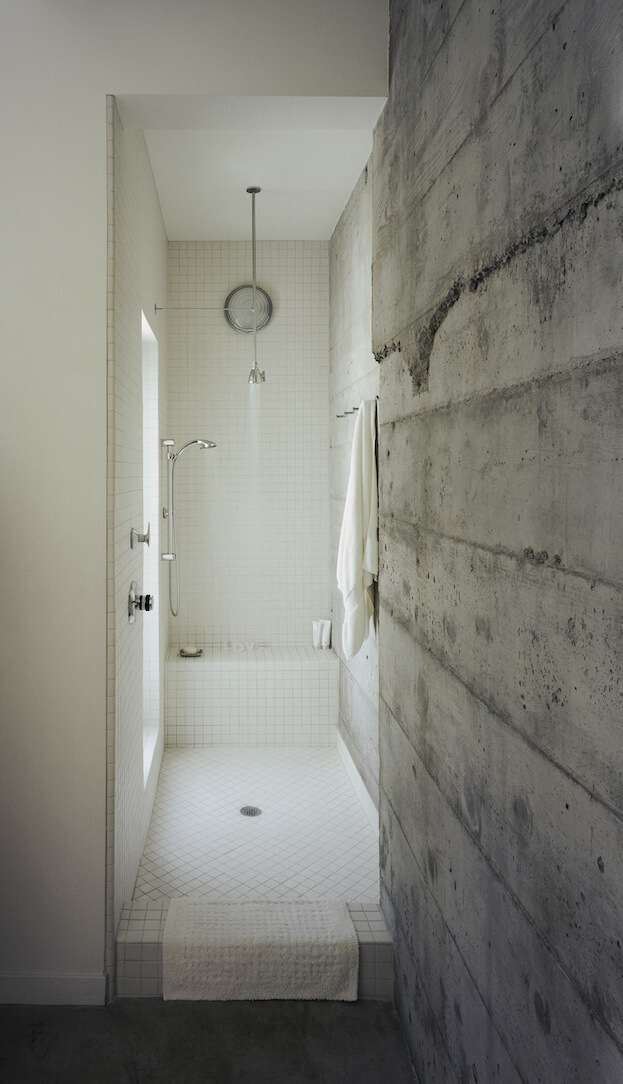 This simple modern shower design implemented both a small ceiling shower head, in addition to a handheld shower head near the shower bench. Overall, they did a great job of implementing a mix of modern and industrial design with the white tile and cement wall in front.

Shower heads come in all shapes and sizes. If you want to enhance your shower experience and establish that relaxing and soothing aroma every night, then you may want to install one of these 11 shower heads as part of your next bathroom remodel.

As always, make sure you talk to local bathroom remodeling pros before you take out your checkbook.