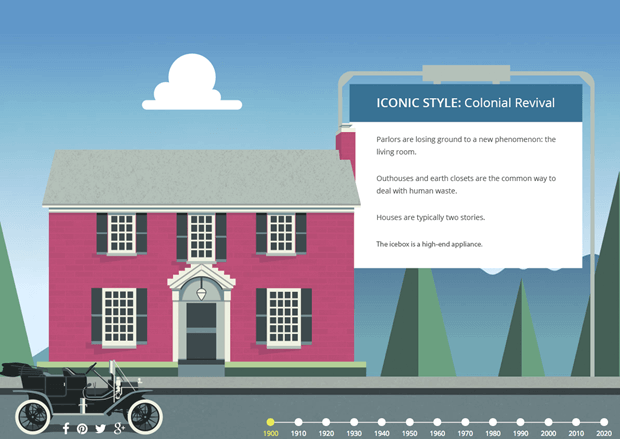 A new parallax infographic from imove gives us a tour of 115 years of American homes.  What’s great about it is that it lets us travel back in time to see how our grandparents’ and great grandparents’ houses were different from what we know today.

Beginning with simple brick structures with no electricity or amenities, American homes have experienced an amazing transformation in just over a century, largely thanks to technology. Electricity brought refrigerators and televisions and remote control garage doors. The advent of the Internet brought advanced home networking systems and security systems we control from our smartphones.

As technology changed the way we lived our lives, our taste in design and architecture became more sophisticated, too. House plans broke out of the symmetrical, two-story square pattern and began exploring heights and widths previously unseen. New materials were introduced with the floor plans, and extra space was hugely popular (until recently).

Imove’s interactive infographic also takes you through decades of car advancements and social icons. Plus, we’ve hidden a few things in there that are symbols of their decade – can you find all of them?

“We’re so used to the technology we enjoy today that it’s hard to imagine living in a house with no electricity or running water. But that was normal just 100 years ago,” imove’s Content Manager, Jessica Hutton, says. “Our research into each decade was really fascinating and sometimes shocking – we take a lot of small amenities for granted these days.”

Now, let’s take a tour of 115 years of American homes! 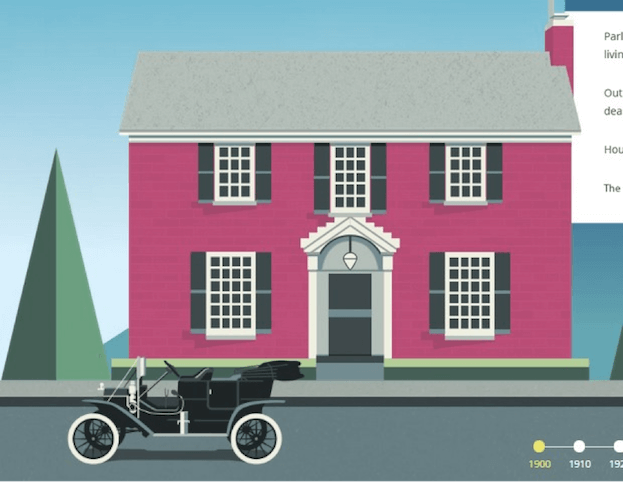 The average home is only 950 square feet, but the largest home ever built the U.S.—the Biltmore house in Asheville, North Carolina—was completed five years ago. The living room replaces the parlor, outhouses and earth closets are common, houses are typically two stories and the icebox is considered a hot commodity. 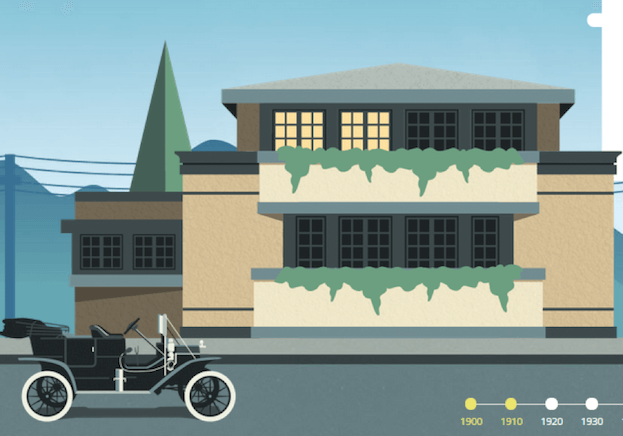 The average American wage is $0.22/hour and electricity is increasingly retrofitted to existing residences. This style consists of sleeping porches, Hoosier cabinets, gas stoves and the new and improved built-in closets. 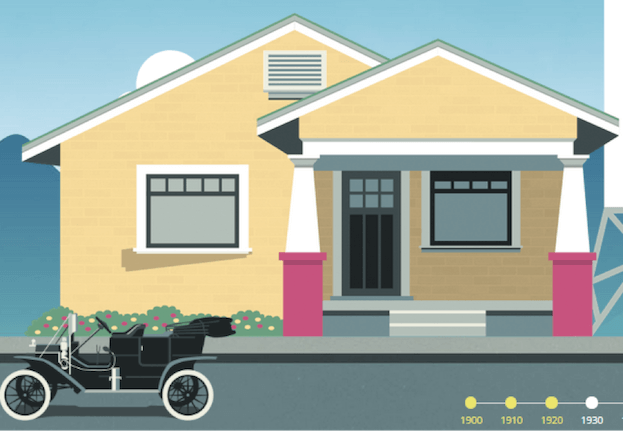 The Model T is the most popular car in the world right now. Kit houses and mass production overtake individual craftsmanship. Almost all house plans include electricity at this point and the unconnected garage has made its way onto the property. Breakfast nooks are all the rage, kitchens move to the back of the house and living rooms move toward the front. The radio is a social centerpiece in the household. 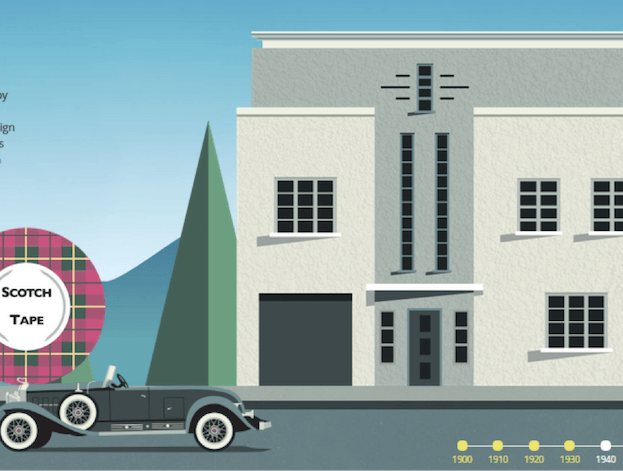 There is now one less person per household than in 1900 (3-4 children drops to 2-3). Kitchens are typically excessively white, tubular steel furniture is desirable, geometric patterns are everywhere, fireplaces start receding into the wall and covered ceilings and arched doorways are the signature trait of this time period. 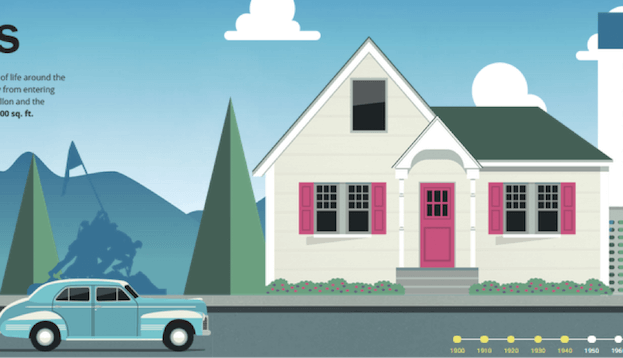 The U.S. is one year away from entering World War II. Gasoline is $0.18/gallon and the average home is $2,938 and 1,000 square feet. Backyards become the new living rooms, most homes have 3-4 bedrooms post WWII, attached garages with entryways to the home surface and TVs start showing up by the late 1940s.

The first color TV program appears in 1951. The post-war housing boom puts the average home at 1,100 square feet and $7,354. This cookie-cutter track home is everywhere—the U.S. built 1.95 million such dwellings in one year to accommodate the growing population.

The 60s overwhelmed the cultural and architectural placidity of the 50s with revolution. This is the era of civil rights, feminine protect and the FDA’s approval of the first contraceptive pill in 1960. The average cost for a new home is up to $11,900. Built-in furniture and hideaway entertainment centers are creeping into homes. The garage is bigger than ever, with nearly half of the home’s floor plan dedicated to it. Major appliances like the dishwasher, washer and dryer, fridge, and TV are commonplace, and the living room has been relocated to the back of the house once again. 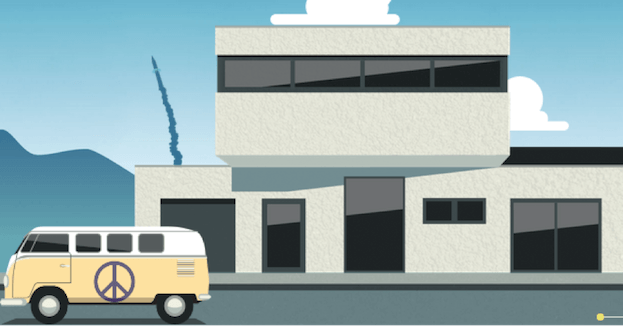 The Vietnam War is in full force, the world meets Atari’s Pong in 1972 and the formation of OPEC leads to a gas crisis in the U.S. The home is ridden with drab earth tones and has an average price of $17,000 at 1,500 square feet. Kitchens are getting smaller as more women join the workforce, one in five homes have a laundry room and over 66% of homes have central air conditioning. Stylistically, we see floating staircases, sunken living rooms, elevated hearths and exposed brick walls. 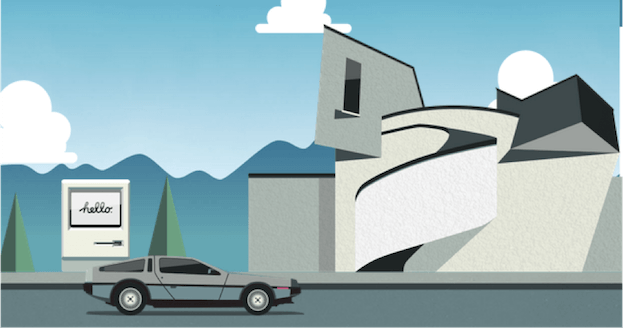 This is a big year for the U.S. Mount St. Helens erupts, John Lennon is murdered and President Ronald Reagan is elected. In 1985, the average family size declines by one person from the 1930 total, and the average home in the U.S. cost $47,200 and is almost 1,600 square feet. People finish their basements (finally), sectionals gain popularity, carpeted bathrooms appear in the late 80s and into the 90s, floral patterns are everywhere and canopy beds are introduced. You’ll see lots of highly-polished brass and wall-to-wall mirrors.

Iraq invades Kuwait, America puts the world’s largest McDonald’s in Moscow and Home Alone is released in theaters. American homes now average 1,950 square feet and cost around $79,100. The fireplace is back after a half-century lull due to centralized heat.  Kitchens are big! Walk-in closets are popular, light woods like pine are preferable and minimalism is huge (think Spartan furniture and blank walls).

The dot.com bubble burst in 2000, hijacked airliners crash into the World Trade Center and the Pentagon and JK Rowling publishes her fourth Harry Potter book. McMansionism is still a thing and the average home is now $119,600 for 2,266 square feet. Luckily, carpet is being replaced by hardwood, builders are installing larger windows and skylights, pine is still very popular and vessel sinks are trending.

As we slowly rebound from the real estate collapse, Apple unveils the iPad and earthquakes devastate Haiti and Japan. New houses are smaller than previous decades (2,169 square feet), yet the average cost is up to a whopping $272,900. Nearly half of all homes have 2.5 bathrooms or more, garages are converted into more useful spaces and open floor plans are extremely popular.

Alright, that’s all we have for now! What do you think the 2020s will look like? We’d love to get your feedback in the comments!