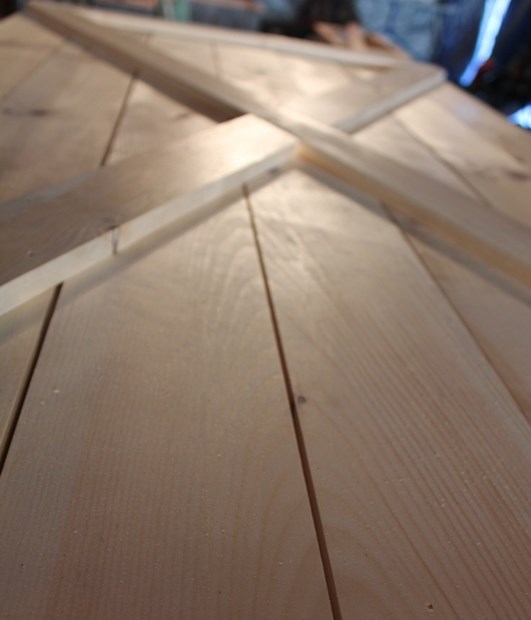 DIYing your very own barn door is easier than you might think. It’s not as simple as, say, chewing, but for the impact it delivers, the DIY necessary is definitely doable for anyone describing themselves as handy and/or owners of power tools.

It’s an awesome way to make a big change in several rooms. Yet, it takes up almost no space and is simple to use. What’s not to like?

While we love the idea of using reclaimed wood so we can morph into a purely Pinterest-based existence of fictitious barns and factories from days of olde (yes, with an ‘e’), reclaimed lumber is expensive and can be hard to find and work with.

What we do instead is buy new lumber. And for us, the knottier, gnarlier and more figured, the better. We used #2 Eastern White Pine 1 x 8 for this door. One ‘new’ thing we do like—straight, untwisted boards.

To design your own door, you need enough verticals (slats) to cover the door opening, plus no less than 1-inch on each side. At least one diagonal brace (or an X like we did) is nice and one stand-off. This goes horizontally above the door. It accepts the door hardware and projects the door past any base molding near the floor. It also looks cool. 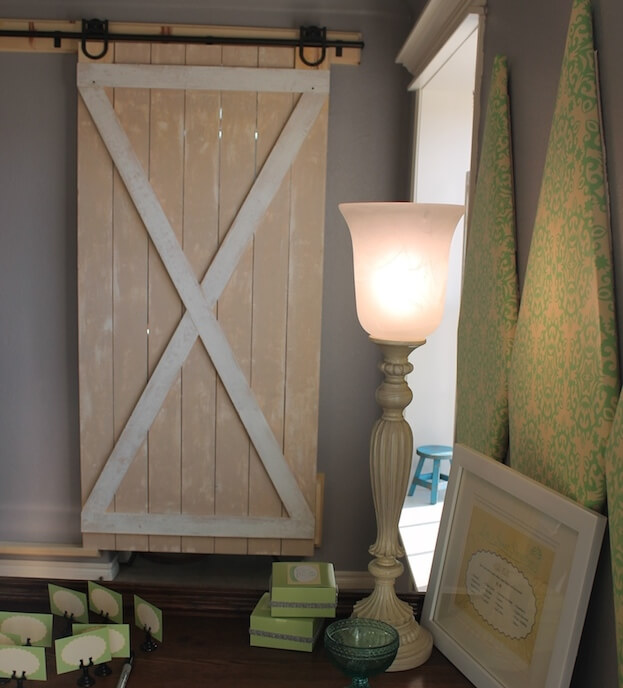 We used a miter saw and our pneumatic stapler for this door. A table saw may come in handy too. We got lucky covering this door and were able to use seven full pieces. If you need to adjust for the size of your door opening, it’s best to make the two outside pieces the same.

What do I mean with the same? I mean that if you need to trim six inches off your assembly of full boards, you don’t lop six off of one end board. You take three off of each end board. Also, you may be able to simply buy a board a size or two down: 1x8 > 1x6 for example. Or 1x8  > 1x4.

We used a CS Hardware package for this door. The door mounts had just the look we liked for this design and they roll on a pipe. Why do we like this? Some door systems roll on rails, which works, but the pipe is plush. It rolls very smoothly. And you can expand the pipe system or double doors. It looks nice, plus the prices are great and the variety of looks cool. Sorry, this isn’t an ad for CS. I just geek out sometimes. Moving on.

You probably have your sweet spot already picked. We installed this one in a bakery makeover on the Food Network Show we did the design-build on called Save My Bakery. But they can be great anywhere from toilet rooms and laundry nooks to kitchens. 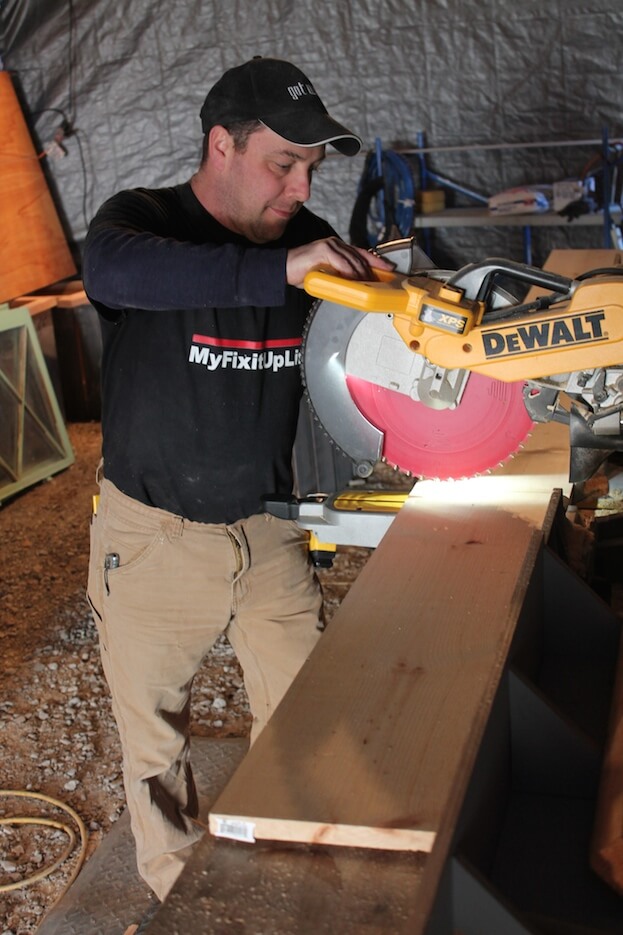 How To Install Barn Doors

A large, flat table is your DIY best friend on a project like this. Sawhorses with 2x4s and a sheet of ¾-inch plywood is about as complex a set-up as you need.

Determine the width of your opening and the door you want to cover. Cut the outside edge boards to width needed as described above.

Next, height. Determine where you want the stand-off and hardware. A few inches of wall color between the top of the door and the bottom of the stand-off is nice proportion.

Measure the distance from the hardware to the floor. Then subtract ¾-inch. The ¾-inch is so the door can move without obstruction and so air can pass freely underneath it when it’s closed. Yes this is important and yes, this why good remodelers are worth working with because they know that and other important things about how a house works. Sorry, back to it. This gives you the length of your door slats.

Tip: I actually just installed a piece of hardware on a board and measured it all in real life so that I could see how it all adds up. You can even put it in place to see how it looks and make adjustments to get what you like. 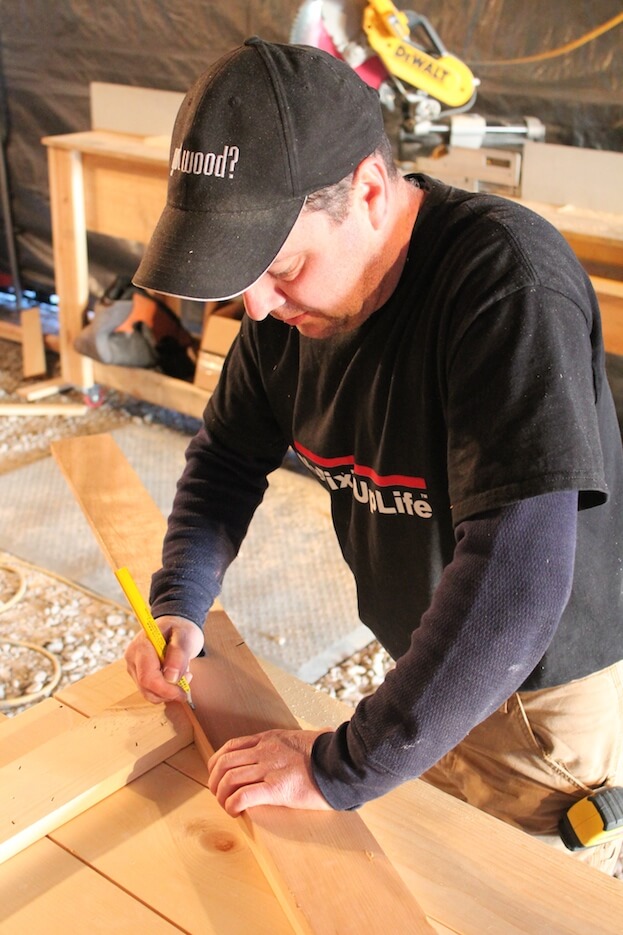 Slats are the verticals. Rails, the horizontals. The rails hold the slats together. There’s no rule or even rule of thumb on where they go. But about eight inches from the bottom and top looks right to us.

There are lots of ways to join them; we’ve used lag bolts and washers, for example. On this one however, we turned to our narrow crown stapler, which we love for this kind of application.

Before fastening, we use the plywood work surface as a template to keep our slats parallel and square during assembly. We use a framing square to keep the rails 90-degrees to the slats.

The diagonal isn’t really necessary on a door like this. Since it’s supported evenly from the top—not by hinges on one side like a regular door—it’s not going to sag. However, we like the look and it does keep the wood between the rails from moving. 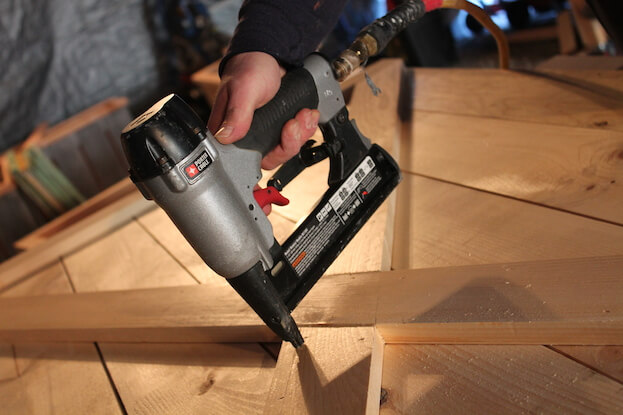 The function of the stand-off is to push the door out past any existing door casing and base molding. On this door, we were deliriously tired at the end of a 48-hour makeover (yes, we really did them in 48-hours) and installed it the first time without the stand-off. There was upset-ness. And laughing. I could tell you stories. Anyway, we were reminded why it’s there. If you want to get fancy, add a routered edge to it before installing.

The key is to install it so your hardware lands where you want it. I do this by a technique I call ‘measuring centers.’ Reason is, with all these pieces, it’s hard to know what you’re measuring to and from.

Anyway, I make a level line on the wall where the stand-off goes (at the top of the stand-off location so it’s covered). Next, at the ends of the stand-off, I make marks ½ its width down from the line (in other words, I measure down 3 ¾-inches for a 1x8). I then mark the center of the stand-off (on its edges) and line them up with the wall marks and install. We like screws for this and they should go into the studs for certain.

The point of all this center stuff, once you get the hang of it, is so instead of covering up marks as we install things, we can see what we’re doing.

Oh, and it looks great.

Finally, a guide on the floor to keep the door in-line is key. We used a router to cut a groove in the bottom edge of our door. 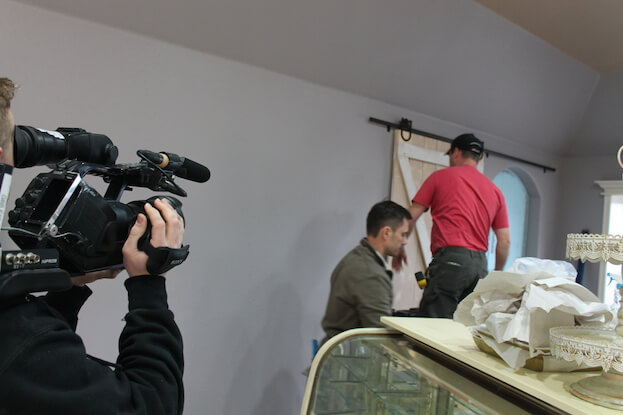 Theresa painted a cool, distressed finish on this door to match the décor of her bakery design. If you’re staining, wood likes to be sanded first, with a fine grit like 120. This opens the pours of the wood and it takes stain better.

There may be a lot of steps, but adding a barn door adds functionality, rustic and modern décor to any home. Are you ready to add a barn door?