DIY Tips For How To Install A Basement Egress Window 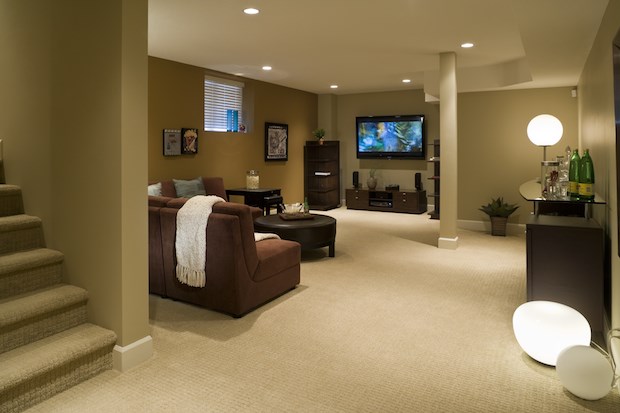 If you're considering a basement renovation as a way to expand your living space, don't be surprised if your building-codes office has something to say about it- especially if a new bedroom is part of your plan. Without an egress window in case of fire, regulations simply won't allow a basement bedroom. And because this ruling is fairly recent in many parts of the country, most existing basements were not built with egress windows. It's a conundrum that could keep you cramped for space, with all the space you need right under your feet. Thankfully, you needn't be restricted by the basement your house was built with. You can solve the problem by cutting a large opening in a basement wall and adding a window that meets code requirements for egress. You'll find contractors willing to do this work, often for between $2,000 and $3,000, or you might consider doing it yourself. About $500 and two days of work for two people will usually finish the job. While this is clearly a down-and-dirty project, there's nothing particularly complicated about it, and the savings can be substantial.

What will you get for your investment? The added light let in by the new, deep window can eliminate the dark and dank atmosphere so common to earlier basement finishes. The sensory difference can be remarkable. In basements, more than anywhere else, light is a critical design element.

Of course, the primary benefit of a deep window is egress- an easily accessible opening through which you can escape or a firefighter can enter in the event of a basement fire. Basement fires are common, so this is really more than a code issue. And of course, what's good for you will be good for the next owner as well. With an extra legal bedroom, you could recover 10 to 20 times your window installation costs when you eventually sell your home.

Local regulations vary, so you'll need to start with a visit to your codes administration office. With minor variances, here's what you'll find:

To begin, not all basement rooms need a legal egress window, but certainly no basement bedrooms will be allowed without one. And if it has occurred to you to call a given room a den before the inspection and a bedroom after, well, let's just say that this isn't a very original idea. Today, any bedroom-sized room with a closet is considered a bedroom, no matter what the blueprint says. As for size requirements, expect to need a window with an opening of 5.7 sq. ft. Some codes count the glass area, while others measure the area with the window open. In any case, a vertical casement window with 6 sq. ft. of access is a good choice for a retrofit installation.

The height of the window installation is also important. The bottom of the window opening should be no more than 44 in. off the floor. Outside, an oversize window well is required. It will need to be at least 36 in. wide and extend 36 in. out from the window. The window well height is also limited to 44 in., as measured from the well floor. If a deep basement forces a deeper window well, most codes will allow a concrete block on the floor of the well to serve as a step, as long as it doesn't interfere with the window's opening.

Our Project and Yours

Our installation was part of a larger basement renovation in a 50-year-old, 2-bedroom home. We placed the egress window in a new basement bedroom, in place of an original small window. You don't have to work with an existing window, but it's vastly easier. Our walls were made of concrete blocks, which are substantially easier to cut than poured concrete walls. We limited the width of our window opening to the span of two blocks, or 32 in. To fit this opening, we chose a Pella ProLine model PCI-25, which is an aluminum-clad casement window (Pella Corp., 102 Main St., Pella, IA 50219). This window requires a 29 x 41-in. rough opening, and costs about $180.

A wider window would have required a structural header under the sill. The header would have lowered the placement of the window and created an exterior trim problem. Our block wall was topped with a 4-in. cap block, bringing the vertical dimension of our cutout equal to five 8-in.-high courses plus the cap block. Lacking the cap block at the top, you would need to cut down six courses and lay two 4-in. blocks in the bottom of the opening.

We scored the blocks with a concrete demolition saw and knocked the pieces out with a hammer. We then lined the opening with a box made of pressure-treated 2 x 8s. To accommodate a tight fit, we had the top and one sidepiece of the box lumber milled to 1 1/4 in. This left enough room to slide the window in place and add insulation between the window frame and box.

We also opted for a code-approved, galvanized-steel window well (about $190). It was costly but cut down on labor. For half the money, you might build the well out of landscape timbers or stones.

First, dig a large hole next to the foundation that's at least 6 in. deeper than the bottom of the future window and about 48 in. square. Clean the foundation wall as best you can and mark the perimeter of the opening with a grease pencil or chalk. Then, use a concrete demolition saw to make the cuts. Our cost to rent the saw was about $18 for half a day.

There's no getting around it: A concrete saw is an ugly, unwieldy tool that creates an enormous cloud of dust. So go at it slowly and wear full eye protection and a tight-fitting dust mask. While there's nothing particularly difficult about it, cutting and removing concrete is messy and can be intimidating. If you don't feel up to the work, hire a professional to do this part of the job, especially if you're dealing with poured concrete walls.

Make your first pass only about 1/4 in. deep and concentrate on making a straight line. Once you've established a pathway for the saw blade, you can focus on cutting deeper. With concrete block, a 1-in.-deep score is often adequate. For a solid concrete wall, try to finish with a cut at least 3 in. deep- ideally, the cut should extend halfway through the wall.

When you've finished outside, make an identical cut inside. Again, expect dust to be a problem. If you can't contain the dust with plastic sheathing and the wall is concrete block, try scoring the inside block surface with a cold chisel. Then, tap lightly with a 3-pound hammer and hope for a clean break along the line. This method usually works but is less certain than a clean cut with a concrete saw.

With the opening cut on both sides, start tapping the upper blocks with a hammer until they either break loose whole or crumble in pieces. In our case, the old window couldn't be freed until the blocks were smashed.

When you've removed all the blocks and chiseled away any obstructing mortar, build the pressure-treated box to fit the opening. Apply construction adhesive to those surfaces of the opening that will mate with the box. Press the box in place so that its outer edge is flush with the outside of the block wall. Then, nail the top of the box to the sill plate and secure the side and bottom members to the wall with hardened concrete nails or a powder-loaded driving tool, such as a Ramset, and 2 1/2-in. nails. To avoid shattering the blocks' webbing, drive the nails into the mortar joints.

We opted for a window without attached exterior molding because we needed extra-wide trim to cover the seam between the pressure-treated box and the basement wall. At the top of the window, the wider trim extends into the siding. For a job with wooden clapboard siding like ours, first measure and mark the siding for the inset trim at the top of the opening. Cut along the lines with a circular saw set for a 1/2-in.-deep cut and use a sharp chisel to complete the cuts in the corners.

A typical untrimmed window has metal fins on each edge that act as nailing tabs for securing the window to the surrounding framework. To install the window, first fold the fins out. Then, set the window aside and apply a generous bead of caulk to the box perimeter. Place the window in the opening and have a helper on the inside center and level it while you drive galvanized nails through the mounting fins and into the surrounding box. With the window nailed in place, mix a small amount of mortar and fill the gap between the wall and the box and any cracks in the concrete that were caused by demolition.

Level the ground in front of the window and lower the well into the hole. Level the well side to side. Drill through the openings along the wall flange and drive Tapcon screws, backed with washers, into the holes in the block. Backfill around the well, tamping the soil down in 6- to 8-in. steps. Finish by creating plenty of ground slope away from the well.

To handle excess water during a heavy rain, you'll need to provide adequate drainage. If your home's basement has a draintile and sump system, use a posthole digger to bore a hole near the wall that extends down to the gravel around the footing. Fill the hole with coarse gravel so that it can act as a spillway.

If no drainage system is in place, dig a 12-in.-deep trough along the back of the well and fill it with gravel.

To finish the bottom of the well, add about 3 in. of gravel to the floor to keep rain from splashing mud against the window.

There are several ways of trimming out a basement window, including using wood extension jambs, but a drywall wrap is about as simple and inexpensive as it gets. Begin by framing the wall around the window. At the window, position the studs so the inside perimeter of the framed opening lines up with the outer perimeter of the window casing.

Then, insulate between the casing and the box and nail metal J-bead to the box on all four sides. Keep the metal bead about 1/16 in. away from the wooden casing. If necessary, add cardboard shims between the J-bead and box to bring the bead in line with the outside of the window casing.

With the J-bead nailed in place, slide strips of 1/2-in. drywall into the bead channel and nail or screw the strips to the framed opening. Caulk the 1/16-in. gap between the metal bead and the casing. Then, drywall the room and install corner bead where the opening meets the wall. Finally, finish with drywall joint compound and paint the jamb extensions with semigloss paint.

What To Consider Before Finishing Your Basement

Turn Your Basement Into The Ultimate Guest Suite