DIY Tips For How To Replace A Washing Machine Mixing Valve 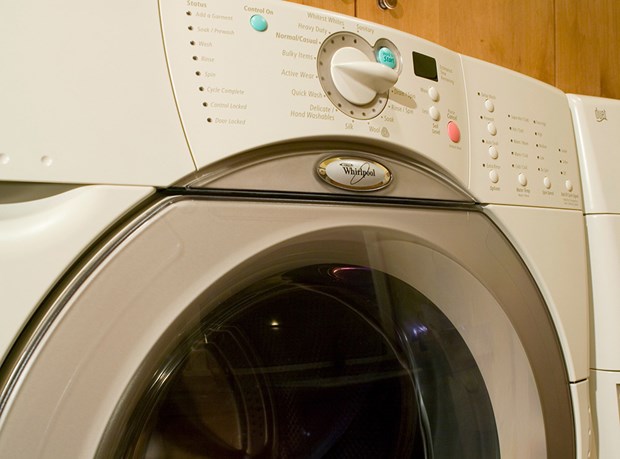 If no water enters your washing machine during the fill cycle, or if only cold water is entering the appliance, there is a strong possibility that the water mixing valve needs to be replaced. Before replacing the valve, however, you should check that the hose screens are clear. There may be screens both where the hoses mount to the valve and where the hoses connect at the faucet. If the screens are clear, then one or both solenoid coils on the valve may be open, or something inside the valve may be preventing it from functioning properly. We show a water mixing valve on a direct-drive Whirlpool washer. The same procedure would apply to Kenmore machines, and the repair procedure for many other makes of washers is quite similar to what we show here. Regardless of the make, you will also need the model number of the washer to order the replacement part.

To replace the mixing valve, first unplug the washer. Then shut off both the hot- and cold-water faucets that supply water to the appliance. Next, move the washer away from the wall so you can get at the fill hoses on the back of the machine. Using pliers, remove the top hose for the cold-water supply. Use a bucket to catch water that drains out. Now wrap a piece of tape around the lower hose for the hot-water supply. The tape will make it easier to identify it when putting it back on the new valve. Remove the hot-water hose.

Next, remove the machine's cabinet to gain access to the mixing valve, which is mounted on the inside of the rear panel. To do this, use a screwdriver, and remove the screws from the plastic endcaps on the control panel. While holding the control panel at each end, gently pull it forward and up. Swing it back so it rests on its hinges. Press the two tabs on the wire-harness connector, and pull straight up on the connector to separate the tabs.

With the cabinet removed you will see the water mixing valve attached to the rear panel. Remove one wire connector at a time, and label it so you will know which coil to attach it to on the new valve. Using pliers, squeeze the spring clamp on the hose and move it back. Pull the hose off the valve. Move around to the back of the washer, and use a nutdriver to back out the two screws holding the mixing valve to the rear panel. Pull the valve from the panel, and the removal process is complete. Install the new valve in the reverse order, and reassemble the appliance. Turn the water on, and check the new valve for leaks to complete the repair.

4 Ways To Tell If Your Pipes Are Worn Out

What First Time Homeowners Must Know About Their Bathrooms

Types Of Water Filtration For Your Home

How To Unclog A Drain