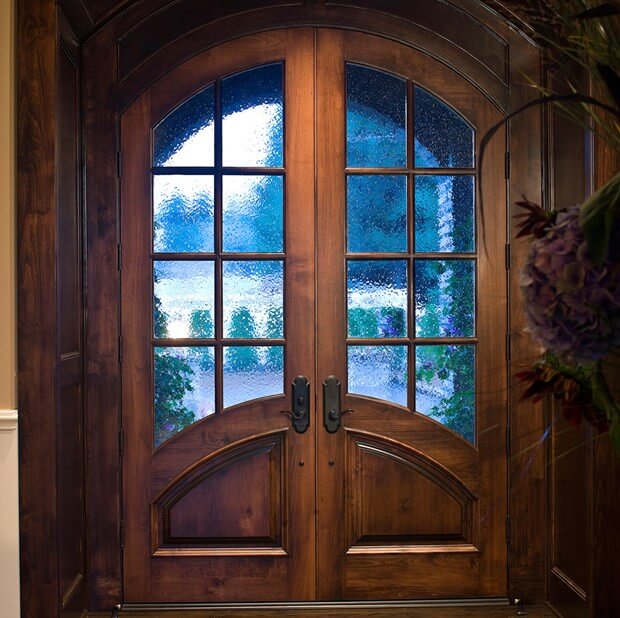 Doors can become warped or cracked and they may not hang straight. Some doors stick when closed, or won’t close at all. Sometimes the doorknob doesn’t work or just falls off. Or the latch may become misaligned and not fit in the strike plate. One way or another, a door will eventually need repairs.

Here are some common problems and solutions.

Sticking doors: Wood doors swell and shrink in accordance with the amount of moisture they absorb from the air unless they are kept well protected with paint. Even that is sometimes not enough. Others stick because hinges have come loose. Stand back to observe where the door appears to be sticking. Just where the door sticks helps indicate the source of the problem.

If the upper edge of the door rubs or sticks against the jamb, it may be sagging away from the top hinge. In that case, first open the door and tighten the screws in the top hinge. If that does not correct the problem, move the bottom of the door out, which will help straighten the door. To do this, open the door halfway and remove the screws holding the bottom hinge to the jamb. Cut a piece of cardboard just the size of the hinge, slip it between the hinge and the jamb, and put the screws back. You may have to put in two or three pieces of cardboard to move the door out sufficiently.

If the door is sticking near the bottom edge against the jamb, do the same with the top hinge.

Door is bowed: If a door is bowed, it has likely taken on quite a bit of moisture. To repair it, lay it over two sawhorses or on some 2-by-4s on the ground, with the bowed side up. Lay some rags on it for protection and then pile heavy objects on it until you see it just begin to straighten under the load. Leave the weights on for several days until it remains straight when the weights are removed. Paint the door to keep it dry, including the hinge mortises.

Door swings open: When a top hinge is mortised too deeply, it causes the door to swing open by itself. Loosen the screws holding the hinge against the jamb but don’t remove it. Slip a piece of cardboard behind the hinge as far as the screws, then tighten. This angles the hinge out slightly and should keep the door in position.

Removing a door: To remove a door, you must first remove the pins in each hinge. But before you do that, open the door halfway and put some shims under the outer edge to support it. Then, with hammer and screwdriver, tap the underside of the knurled top of the pin to loosen it. Remove the bottom hinge first, then the middle hinge, and finally the top, so you can readily catch the door if it falls over.

If the pin won’t budge, insert a nail or nail set into the open bottom of the hinge and hammer the pin up. Some older styles of pins are threaded and must be unscrewed. Others have a cap on the bottom that must be unscrewed first so you can then tap the pin up from below.

Planing a door: Sometimes a door is warped to the point that you have to remove it and plane down one edge so it will fit properly. First determine the area that must be planed by slipping paper between the door and jamb. Where the paper catches is the section that must be planed.

1Place the door against a table or workbench to support it while planing. Keep in mind that it is much better to plane too little and put the door up and down a couple times than to plane away too much wood. When you are finished, paint or stain the door to protect it and reinstall.

Cutting a door: If the bottom of a door must be trimmed to clear new carpeting or to fit a new threshold, cut it with a saw. Remove the door as explained above and place it on a workbench, table, or sawhorses.

Measure carefully, then mark a line where you will cut. Remember to save the line when you cut. If you cut on the wrong side of the line, you will take a saw blade’s width too much. Next, use a utility knife to deeply score the cutting line to prevent the door’s veneer from chipping and splitting. You can also place strong tape over the cut line to protect the door. Use a fine-toothed saw blade and clamp a straightedge to the door to guide your power saw.

If you cut the bottom from a hollow core door, you may cut away the bottom rail and leave the cavity exposed. If that is the case, chisel the veneer off the cutoff portion, put glue on both ends and sides of the old door bottom, and slip it back into the base. It will slide right up between the veneers and lock into the rails on each side. Make it flush with the bottom of the veneer, then paint or seal the bottom so it will not absorb moisture.

Hinge squeaks: Tap the hinge pin up about halfway, spray some graphite on it, and tap back down. Alternatively, spray with WD-40 or put on a few drops of light oil.