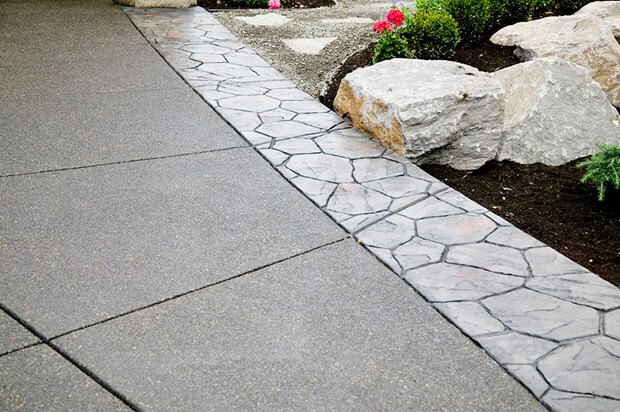 Exposed Aggregate: Aggregate, or small stones, are embedded in the surface of concrete as an alternative to paving it. The aggregate should be small, smooth and varicolored stones for the best effect. They can be sprinkled randomly on the surface or laid in specific patterns.

Finishing a slab or walkway with exposed aggregate takes some practice to master. It is all about timing. And timing depends a lot on the temperature and humidity. Basically, once the concrete has just lost the watery sheen on top, the aggregate is spread evenly over the slab surface. For large areas, sometimes a retarder is sprayed on the concrete to prevent it from setting up too quickly. After the rocks are dispersed, they are troweled into the concrete until barely visible.

Then, before the concrete has hardened, but is not too softremember, it's all timingthe surface concrete around the small stones is washed away with a sprayer. It's a delicate process to wash away the concrete on the surface of the aggregate without washing the aggregate itself away, or leaving it too loosely embedded. An excellent way to control the spray is with a curved watering extension that attaches to the end of a hose. Hold the curved end almost at ground level to deliver a nearly horizontal spray that exposes the aggregate.

For an effect similar to exposed aggregate on an existing slab, smooth, colored stones can be embedded in a clear epoxy or cementitious mix that binds the stones to the slab surface. This is particularly widely used around residential swimming pools. The surfaces are cool, non-skid and easy on bare feet.

An epoxy overlay, sometimes called chattahoochie, is poured over the slab with the aggregate. This mix relies on a chemical reaction between boding and resin agents to give a hard, flexible, clear film layer. Cementitious overlays function in a similar fashion.

What Is A Crawl Space & Why Do You Have One?

How To Prevent Water Damage To Your Foundation

Electric Vs. Wood-Burning Fireplace: How They Match Up