How and When to Hang the American Flag 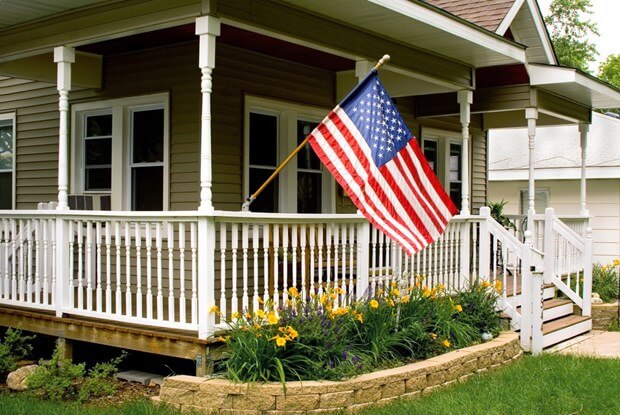 Whether you call it Old Glory or the Stars and Stripes, the flag of the United States is indeed grand and old. Its shape and general configuration were adopted by Congress on June 14, 1777, a day that is now known as Flag Day.

Even in this age of hair-trigger political sensibilities, its fair to say that our flag is still regarded with a high degree of respect and affection. And although its unlikely that anybody will raise a fuss about how you fly the flag, its display and even your conduct regarding it is codified in national law. If you want to read the specifics, see U.S. Code, Title 36, Patriotic Societies and Observances, Chapter 10, Patriotic Customs. You can read this and other U.S. Codes at the outstanding website posted by the Cornell University School of Law (www.law.cornell.edu/uscode). So if youre flying the flag this July Fourth - rather, if you're displaying it, thats the proper term - it couldnt hurt to display by the rules. Here, then, follows a brief summary of the U.S. Flag Code.

Independence Day is a flag holiday - one of 17 days specifically designated in the code on which citizens are encouraged to display the flag, if they're not in the habit of doing so daily.

Flag holidays are as follows:

The code also urges citizens to display the flag on additional days that are proclaimed by the president of the United States, on days that commemorate the date in which their state was admitted to the union, and on specific state holidays.

The flag should be hoisted briskly at dawn and lowered ceremoniously at dusk. The flag should be displayed at night only if it is lighted dramatically, as from below. To fly the flag at half-staff, raise it briskly to the top of the pole, keep it there for a moment and then lower it to half-staff. Before taking the flag down for the day, return it briefly to the top of the pole.

The flag should not be displayed on days when the weather is inclement, except when an all-weather flag is used.

When the flag is displayed from a staff projecting horizontally or at an angle, the union (the blue rectangle on which stars are embroidered or fastened) should be at the staffs peak, unless the flag is being flown at half-staff.

When displayed horizontally against a wall, the union should be to the left of the observer, looking from the street or in the audience. The same holds when a flag is displayed horizontally in a window. When the flag is displayed vertically against a wall, the union is also to the observers left. Likewise when a flag is hung vertically in a window.

For visual reference on all of this, visit the American Legion website (www.legion.org).

Never use the flag for advertising purposes, as drapery, linens, or as clothing, or print it on items soon to be discarded - napkins and paper plates, for example. It should not be used as part of a uniform, athletic or otherwise, unless you are a member of the military, a patriotic organization, police force, fire department, or rescue/ambulance squad.

Never attach a flag directly to a vehicle or drape it over a vehicle. Instead, the flag should be attached to a staff secured to a vehicles chassis or to the right front fender. The flag should be displayed on floats in a similar manner. When bunting is used for patriotic display instead of a flag, the colors are arranged from top to bottom: blue, white, and red.

Never display the flag in a manner in which it is easily damaged or with it touching the ground.

Never display the flag upside down, as this is a distress signal.

In unabashedly old-fashioned and refreshingly blunt language, the code calls on all those present to recognize the flag when it passes as part of a holiday parade: Stand. Place your right hand over your heart. And in particular, the code says: "Men not in uniform should remove their headdress with their right hand and hold it at the left shoulder, the hand being over the heart." Military personnel in uniform should "render the military salute."

Flowers and Other Patriotic Facts

Suppose you were to give someone flowers and you wanted to be patriotic about it. Which flower should you choose? The rose is designated as the national floral emblem. Although no color is specified in the code, our choice would be a dark red type, such as the hybrid tea rose named Mr. Lincoln.

If you were to utter our national motto, what would you say? It would be, "In God we trust." And if the heat werent too great and you were roused to march, what tune should you march to? The national march is "Stars and Stripes Forever" by John Philip Sousa.