How To Build A Gazebo

When you feel like your backyard is missing something, more often than not, it’s a beautiful and functional addition that can make all the difference. Outdoor gazebos are the perfect solution and while the project is certainly no walk in the park, it can be done yourself.

Gazebos will not only increase your curb appeal, but more importantly, give you and your family a safe place to spend time together outdoors, even if the weather is not cooperating. But before you enjoy its ample benefits, you must build it. Below, I will use a step-by-step guide and show you how to build a gazebo without the help of a professional.

Given that wood gazebos are the most prominent, I will focus on this option. However, please note that vinyl and aluminum have their place as well. See how they stack up in Why You Should Add An Outdoor Gazebo This Summer. Additionally, most gazebos will come with precut pieces, as I will assume in this case as well.

Just like a deck or patio, it all starts with the base. You need a solid foundation before anything else.

Start off by taking your outside boards and place them in a hexagonal shape where you want to place the gazebo. The size of the boards will of course depend on the desired size of your gazebo. The best place for a gazebo is usually near other landscaping features.

Screw the boards together. Then, take the same number of additional boards, or joists, and place them at each interior corner. Make sure the angle at the end of the inner joists matches that of each corner. Once again, screw them together. Then, lift your inner joists in the center of your gazebo and drop in your center block. Make sure their heights are the same and attach the joists to the block.

After all blocks and joists are attached, grab your support blocks and place them under each corner and center. Make sure the entire gazebo is level before moving forward.

Note: Some homeowners add extra boards between the outer and inner joists. While this is not necessary, it does add stability. 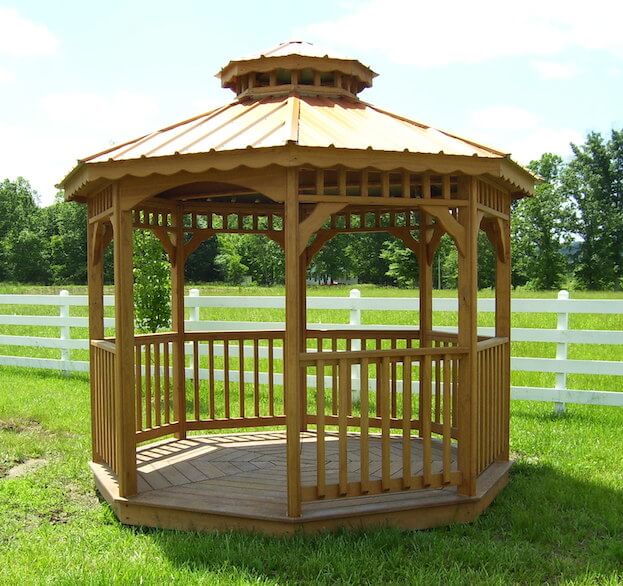 It’s time to fill those gaps. Many gazebo kits come with a fiberglass screen that should be placed below your deck. After you lay this down, locate your cleaner boards and start assembling the deck. Since these boards will show, make sure they are not dinged or scratched in any way. Otherwise, your gazebo repair costs could rise before you know it.

Using the same process, work your way in as you go around the hexagon. Make sure you leave a small gap between each board. Once you get to the center, add your center block and nail it in.

Whether you want wood balusters or a solid wood wall, the same process applies.

Now that you have your top rail assembled, place it on your bottom board or rail and nail them together. Make sure the nails are not too long as they could show.

Just like a deck, rinse and repeat this section for the entire wall. Do not attach wall sets to each other or the gazebo.

Grab two long boards that will connect all the gazebo walls. Place them on the ground and using a pencil, mark the height of the gazebo base (on the support blocks). Do not place the balusters, solid walls or bottom rails below this point.

Take your balusters and place them between two long boards. Screw them in. Then, take one set of balusters and screw them into one separate long board. With these, you should have one side with no long board. That’s because I want you to lay it side by side with another board, making sure its flush, before screwing them together. Keep in mind that the long boards will have to be placed on an angle thanks to the hexagonal shape. Once all walls are level and have the same overhang, connect them to the deck. You can also place mini support blocks in between each long pole below your balusters.

Note: If you’re building an all-season gazebo or wanted more protection on the outside (like windows), more steps will be needed, but for the most part, the same principles apply.

Hopefully, your long poles have notched corners for your headers or boards that go around the gazebo on top. If you don’t, you will have to add a small support piece on the side of your long poles. These pieces will be connected to your headers. Go all the way around your gazebo and screw them together.

Time for the roof. For this step, you will need an assistant.

Then, Person B walks to the opposite side and screws in another rafter. Person A attaches that same rafter to the center block. Go all the way around your gazebo, attaching opposite sides right after each other. Some gazebo kits will also include short rafters for extra support. Attach those at this time.

After that is all complete, attach your fascia, or outer boards around the rafters.

Note: For an 8-sided gazebo, you will have center rafters (those that go between each corner). Six-sided and 4-sided will not.

In your kit, you should have a set of batten boards. These act as your roof base. Start at the bottom of the gazebo with the longest batten boards and work your way up. The end of each batten should be placed at the center of rafter. Before screwing them in, make sure you have equal spacing between each batten. If you want to use roof sheathing, better for areas with a lot of ran, do not leave any space. Work one pie wedge at a time.

Next, we have to add shingles. On the outside, just like the base, make sure they have at least a half an inch overhang. Gather all your shingles and start with your outside row. Nail them in at an angle. Given your roof’s slope, rain shouldn’t drip onto your base. Do one pie wedge at a time and work from the outside in as you attach your shingles. Double up the shingles in the outer row.

After all the shingles are in place, cover the seam between each pie section with ridge shingles. Work from the outside in and make sure all seams are covered all the way around your roof.

We are almost done. The following two steps are optional and some gazebos will not require them.

If you want an attractive centerpiece above your gazebo, then you will want to build a cupola. Much like a small gazebo, you will have to screw in the sides one by one and then once its completed, attach it to the top by drilling down through the shingles on the rafters.

Finally, if you bought a gazebo with upper balusters, you will want to attach those at this time. Like the bottom balusters, assemble them on the ground and then attach them to the gazebo.

Building gazebo without the help of a pro is a challenging project, but one many homeowners can accomplish if they have the patience and drive to finish the job right. Now that you have the steps, it’s time to go out and build.

To visually see the process, check out this handy video below.

The Best Backyard Fence For Dogs

How To Landscape With Stones