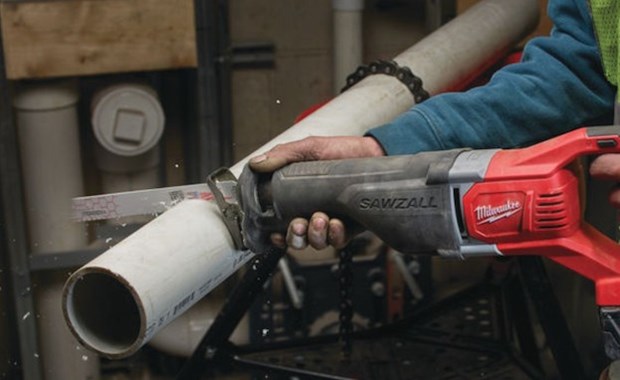 ‘Sawzall’ is one of those names that has become the de facto word describing an item made by lots of companies, namely the reciprocating saw. And when you use one, you want it to be nimble, but tougher than a CMU thunder shack.

‘Hey, get the Sawzall’—no matter what brand of recip saw the carpenter is asking for—is about as common a phrase on a job site as ‘get me a Band-Aid’ is around the house when someone actually needs a ‘plastic adhesive strip’ or 'pop-sicle' when the person really wants an ‘ice cream novelty’.

At any rate, Milwaukee Tool invented the Sawzall and still calls their long line of recips ‘Sawzall’ to this day. And, not surprisingly, they make a cordless Sawzall that kicks serious butt: The 18-volt battery powered 2621-20, which I have put through paces from deep freezes to every day remodeling.

At every layer, the tool works. It’s solid without being massive and small (great for remodeling) without being wimpy. The rubber overmold provides a solid grab in all the oddball places we use these saws, whether that’s cutting a hunk of wood overhead or slashing out the bottom plate for a door opening.

The blade change is absolutely top-drawer. Reasons #1-37 that I’m not an electrician or plumber isn’t that I don’t get it, rather, it’s that little pieces and jiggering around with small parts frustrates me so much that my body starts to metabolize its own organs when I install a ceiling fan or recessed light trim. Sure, I’m happy when I’m done, but geeze. The 2630-20 blade change mechanism is what a blade mechanism should be: Easy, effective and solid as the aforementioned CMU thunder shack.

The M-18 battery platform also kicks a pile of tail. I use the batteries in other Milwaukee tools (impact driver and circ saw, both tools are heavy hitters too) so I’m not just plopping freshies into the recip when I need it. I’ve both frozen and scorched these batteries and beaten them around in the truck and dropped them off ladders doing everything from simple repairs to our 10-episode build gig on Food Network.

And then there’s the exhaust air I can’t seem to get to blow dust back in my face, no matter how I position the saw. Every tool blows a pile of dust back at you at some point, and I’m sure this Sawzall did in the months we’ve had it, but I’m also sure I can’t remember if it did or not.

So to me, all these details back up a tool that’s an instant reach when something needs to be cut out, down or otherwise removed like a boss. Now, get me a plastic adhesive bandage. I think I got a hangnail typing this.