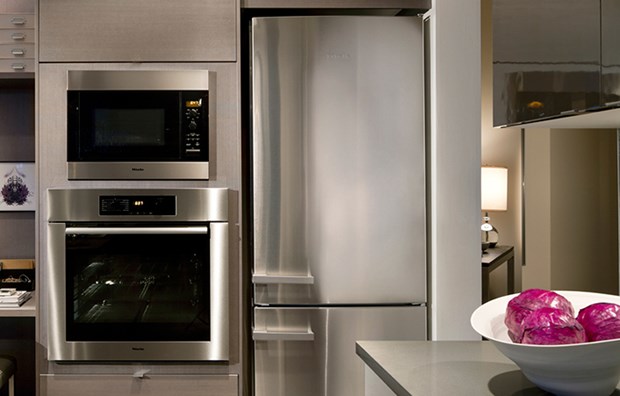 We’re still focused on pushing green technology and appliances in the kitchen area. The Department of Energy’s “Energy Star” rating has become a focus for many kitchen appliance owners these days, as it both decreases energy bills and increases energy efficiency in the home. However, we’re not so big on the color anymore. We can add a splash of it with decorations here and there in the kitchen, but our appliances aren’t bright colors.

Read on through an article on what the trends were a decade ago, and how much the trends have changed or stayed the same since then. See what updates you might need to make in your kitchen if it matches more of what people were looking for in 2001.

We've seen the future of appliance finishes and it's stainless.

From coast to coast, stainless steel finishes rank number one. That's the current consensus of kitchen designers across the country. "We're still in a big stainless steel appliance phase," says architect/interior designer Neil Sandvold of Sandvold Blanda Architecture + Interiors, a Philadelphia design firm. "We're going to be seeing all-stainless kitchens for a while, at least for five more years."

West Coast designers are mad for the metal, too. San Francisco-based architect and interior designer Steven House, of House + House Architects, agrees that stainless is here to stay. "Stainless is a kind of non-color," says House. "It goes with everything and looks really nice. The great thing about it is that it works in every kitchen, from traditional to contemporary. Stainless costs a little more, but in the long run it's worth it."

Besides stainless, black seems to be the number-two hue. "Black is still very in. For some reason, people think white looks cheap," Sandvold says. He cites Viking's new line of "Graphite" colored appliance suites as a popular choice. "After stainless or using cabinet facings that match the rest of the cabinetry in the kitchen, I like black," says House. "It's striking, it's elegant, it goes really well with black granite countertops. Food looks best contrasting with dark finishes like gray or black."

But metal mania may not rule the new millenium. Color will begin inching its way into the kitchen too, Sandvold predicts. "Just like the new bright iMac computers, other companies are consulting their prisms and rolling out products in hot colors, including appliances." Jenn-Air launched Blue Creek, a line of jewel-hued appliances last year. Viking also recently introduced suites of appliances in blue, forest green, burgundy and plum.

So several companies have rolled out colorful ranges, refrigerators and more. But is anyone really putting them in their kitchens? Not to any extent, says Sandvold. He says he uses the vivid appliances as an accent piece within the kitchen, for example, a green range to complement a cabinet-clad refrigerator and dishwasher. But his vision for the future of kitchen design, Sandvold enthuses, starts with color. "It would be great if we could buy different appliance panels and change them like slipcovers," says Sandvold. "I think that could be happening in the near future. It would be like a Nokia cell phone that has five different covers. You could say, ' Today I feel like green' and your appliances are instantly transformed."

Whatever your preference, Sandvold's take on the future of appliance looks is about having fun with whatever looks good to you. "People seem to be happy about spending money right now - austerity is out, technology and spending money is in" he proclaims. "It's like the late Victorian era, all styles are being put into a pot and being stirred around. It's about finding your own style and look for your kitchen and being proud about it."