If you can’t beat ’em, join ’em – at least that’s what the Oxford Dictionary’s mantra must have been as it announced that its 2015 “word” of the year is none other than the emoji 😂. In a world where Twitter is king and brevity reigns, people are having to go graphic in order to express themselves in 140 characters or fewer, and emojis are the ultimate space saver. We jumped on the bandwagon and combed through more than 200 million tweets to find 2,467,972 that both mentioned a U.S. location and used an emoji in order to figure out which states follow the trends and which march to the 🎵of their own drum. 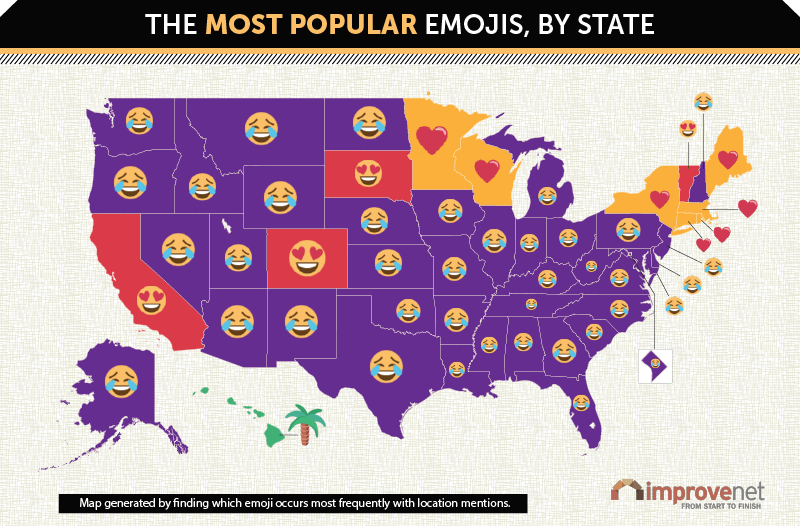 Given that 😂 (also known as Face with Tears of Joy) made up 17% of all emojis used in the U.S. in 2015, it’s hardly surprising that it was also the No. 1 symbol for almost every state. Minnesota, Michigan, New York, Maine, Massachusetts, and Connecticut instead favored the classic heart shape (and here we thought it was Virginia that was for lovers). California, Colorado, South Dakota, and Vermont were also feeling the love, but opted to use 😍 to show it. There, it seems, beauty really is in the eye of the beholder.

… And then there’s Hawaii, who’s ignoring the rest of us to bask in their tropical paradise 🌴. 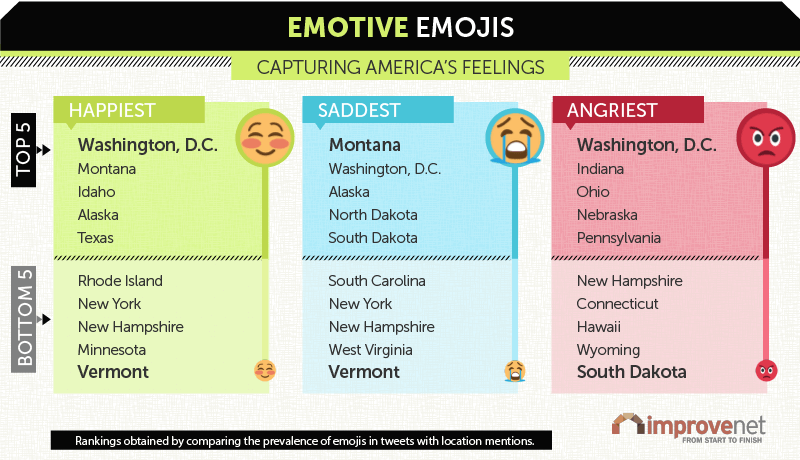 Next, we looked at the percentage of emojis in each location that fell in the Happy, Sad, and Angry categories and came up with a list of the Top and Bottom 5 states for each emotion. We’re not exactly sure what we expected, but it definitely wasn’t to see the Big 🍎 low on the Happy list. Or, for that matter, for Washington, D.C., to come in at No. 1 on both Happiest and Angriest. Although, given the current state of bipartisan politics in our country, it makes perfect sense that on any given day the Republican half of the capital might be feeling happy at the expense of their Democratic neighbors.

Also of note: Not being sad is, evidently, not the same thing as being happy, and vice versa. New York, New Hampshire, and Vermont all placed in the bottom five on both the Happy and Sad lists. So they’re not sad, but they’re also not even close to happy. They’re … meh? And then there’s Montana, which somehow manages to be both at once. 😕

One call we did make, however, was Hawaii’s spot on the Least Angry list. Because, really, what’s to be angry about with the 🏄 and 🌴 calling your name? 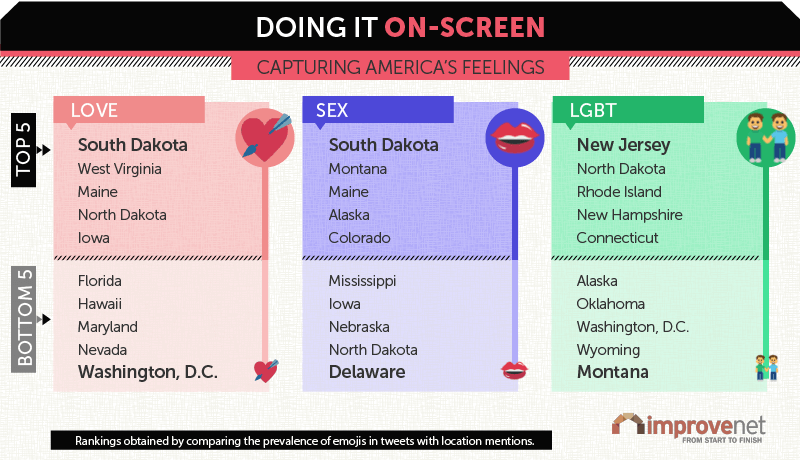 But let’s get down to the good stuff – your love lives 💓. Using the same ranking system, we analyzed which states talk most about love (including LGBT) and sex – and if we learned one lesson, it’s that there’s more to South Dakota than meets the 👀. The fact that it has the most tweets about both love and sex but still ended up on the Saddest list makes us think that a lot of those moments ended in heartbreak for the Mount Rushmore State. But it takes a strong state to not be angri(est) about it.

We’re also surprised to see that Washington, D.C., clammed up in the LGBT conversation, considering the subject has been a major debate on the political stage for decades. But maybe it’s for the best that issues of civil liberties are discussed in real words as opposed to 👎 and 🌈.

But of course it’s not all love and laughter on Twitter, even where emojis are concerned. We dove into the dark side of the tweets to uncover which states are most (and least) wrapped up in certain unsavory subjects. Unsurprisingly, Nevada, home to Sin City, topped the lists for Alcohol and Gambling, and NRA strongholds such as Oklahoma and Texas made a showing in the Weapons column. Maine’s spot at the top of the Drugs list may come as a surprise to those of us who associate the state mainly with its lobster and rugged coastline, but Maine has indeed been experiencing a huge surge in heroin usage and overdose deaths over the last few years.

Finally, Utah’s spot as dead last on the Alcohol list can be attributed to many factors, including the many members of the Mormon (LDS) ⛪ who reside there, but the state itself also discourages drinking by enacting and enforcing bizarre liquor laws. With such a lack of Happy Hours, we’re surprised Utah didn’t register in our Bottom 5 for Happiest... 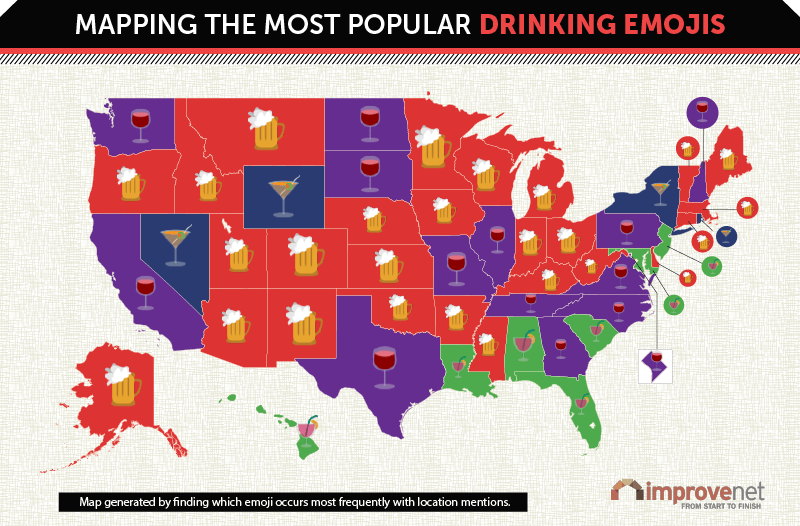 Nevada, Wisconsin, and Louisiana may all be in the top three when it comes to mentions of alcohol but, as this map shows, they’re divided when it comes to picking their poison. Nevada, along with New York and, strangely, Wyoming, are cuckoo for cocktails, while Wisconsin, along with most of the rest of the country, is content with a cold one🍻. Louisiana and other warm Southern states opted for a more tropical drink, and, surprisingly, so did Maryland and New Jersey. Whatever gets you through winter, folks ❄. 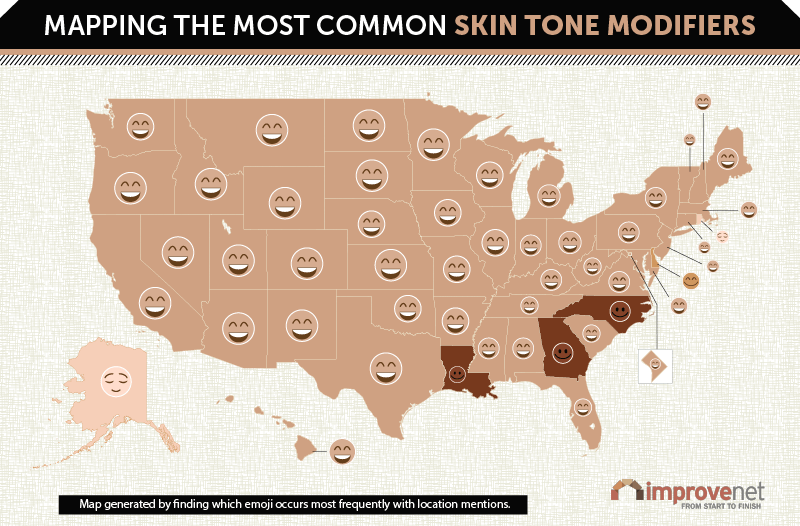 Happily, 2015 marked a big year for emoji fans: New developments allowed users to customize certain aspects of their emoji’s appearance, including skin color, which is classified according to the Fitzpatrick scale. We tracked which skin shade each state chose most frequently and found that most of the country is comfortable calling themselves a Type III, which burns moderately but tans uniformly and can have any hair color. Notable exceptions are Alaska and Rhode Island, whose locals see themselves as a shade or two paler; Delaware, where residents are firmly a IV; and North Carolina, Georgia, and Louisiana, which boast those who identify as a solid Type V. Personally, given their long rain season and absolute lack of 🌞, we think the Northwest is being a bit optimistic about their tan.

Now that we’ve covered booze, money, and sex, the only topic left to make this list truly American is – you guessed it – sports. We’ve mapped the most commonly occurring sports emoji for each state, and our research (and others’) makes one thing very clear: Baseball as “America’s favorite pastime” is a thing of, well, the past. Just six states in the Union emoji-tweeted most about baseball, as opposed to a whopping 37 who paraded their love for the pigskin on Twitter🏈. The good news for the MLB, though, is that the catchphrase “California’s favorite pastime” is still up for grabs … assuming it hasn’t already been claimed by staring at the ground on Hollywood Boulevard. Unsurprisingly, New York, Kansas, and Missouri, who had teams in the World Series, were all about ⚾ in 2015.

And, despite ⚽ being the most popular sport in the world, the only place in the U.S. where it can claim that distinction (as far emojis on Twitter go) is in Washington, D.C. Just a guess, but perhaps that has something to do with D.C.’s being one of the non-border “states” with the highest percentage of non-citizens in the U.S.

Get Your Emoji On

In the end, Congress may cling to factors like GDP and electoral votes when categorizing the country, but we think our method is much more fun. Sure, you could envision South Dakota as a frozen, isolated tundra, but one look at its most used emojis and it’s instantly recast as a basketball-loving, wine-guzzling, strangely sex-obsessed state. New Hampshire, on the other hand, seems to have adopted “Moderation in all things” as its unofficial state motto, coming in at the bottom of the list for happiness, anger, sadness, gambling, money, and drugs. But, given that they’re in the top five when it comes to weapons, we’d rather they were boring and even-keeled than atop the anger list.

… And then there’s Hawaii, whose residents are still ignoring the rest of us to bask in their tropical paradise 🌴.

We analyzed every geotagged tweet from 7/1/2015 to 10/31/2015 for two conditions: 1) Does it contain an Emoji? 2) Does it contain one of the 252 location-specific terms we specified (states, cities, and landmarks)? This narrowed down our collection of 261,667,894 tweets to 2,467,972 tweets. We then aggregated location-specific terms (landmarks, cities, etc.) and combined them with the states they’re in; so, Las Vegas data is a part of Nevada data, Yellowstone is a part of Wyoming data, etc. Maps were generated by seeing which emoji from a collection occurred most frequently in a state. Ranked lists were compiled by finding the prevalence of each emoji in each state and then comparing the sum of percent occurrences of a collection of emojis across all states. All emojis used on this page were sourced free from Emoji One.

Feel free to share the images found on this page freely. When you do, please attribute the authors by providing a link back to this page so your readers can learn more about this project and the related research.