Some people are consumed with home improvement projects, others are consumed with neighbors who are "projects." (If only we could outsource the latter to professionals.) All that aside, in this turbulent season of coronavirus and contentious politics, we've decided to focus on what's good in the neighborhood.

We need neighborly love right now - at a safe distance, of course. In a recent poll of 2,500 Americans, we set out to learn how neighbors are getting along and where in America their bonds are tightest.

The response we heard from respondents is a ray of light in an otherwise dark year. No matter how it may look on social media, neighbors in America tend to like and care for each other - many spend time socializing, and most are quick to offer a helping hand.

If ever there were a test for neighborly bonds, it would be a global pandemic. So many aspects of this crisis have put pressure on neighbor relationships, most notably the fact that we’re now in and around our homes all the time.

It’s All Good in the Neighborhood

Sixty-nine percent of those we surveyed have gotten to know their neighbors better during the pandemic, and 65 percent have made an effort to be more friendly than usual. Even better, nearly seven in 10 Americans say they appreciate their neighbors more than ever, as a result of what’s transpired this year. These data make up a resounding takeaway from our survey: in 2020, Americans have gotten closer to the people they live near, and they are increasingly grateful for those relationships. 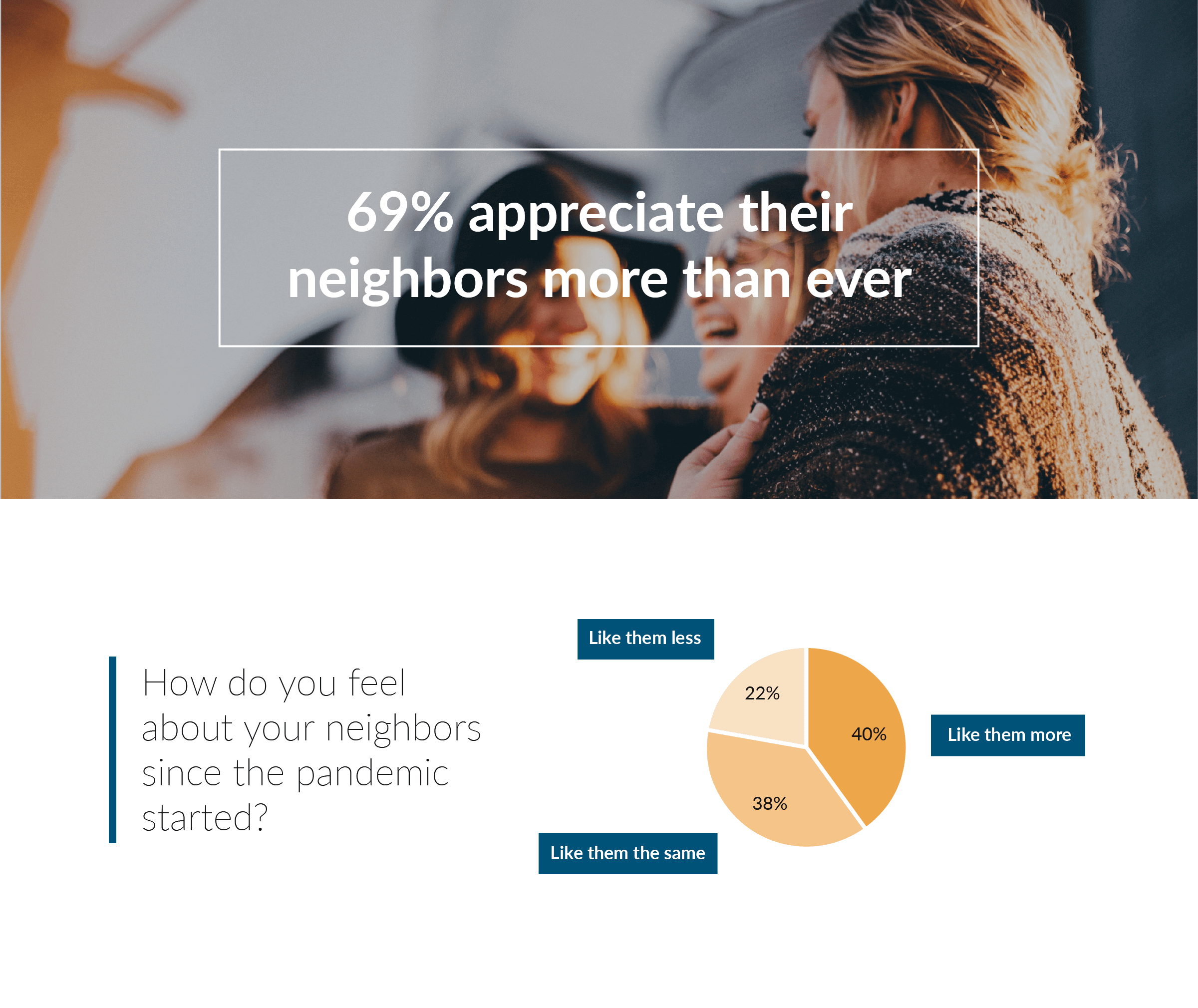 Relationships between neighbors go well beyond a smile and wave on the weekend. Nearly one in four people report frequently socializing with their neighbors and 86 percent get together at least occasionally. Fifty-four percent of those we surveyed report they had at least one socially-distanced gathering with neighbors during the pandemic.

Given so many quarantine restrictions, people’s options for socializing in 2020 have been very limited. Many Americans have turned to their neighbors, particularly when friends and family have had to stay away. Sixty-four percent of those we surveyed report they spent more time with neighbors during the pandemic than they did before it, and 57 percent have at times considered neighbors as substitutes for family and friends.

Of course, this was a year of isolation as well. Of those who said the frequency of spending time socializing with their neighbors changed during the pandemic, 53 percent say it increased but 47 percent say it decreased. Additionally, 59 percent of respondents report they have at some point sensed one or more of their neighbors is lonely. About 6 in 10 reached out to offer help. 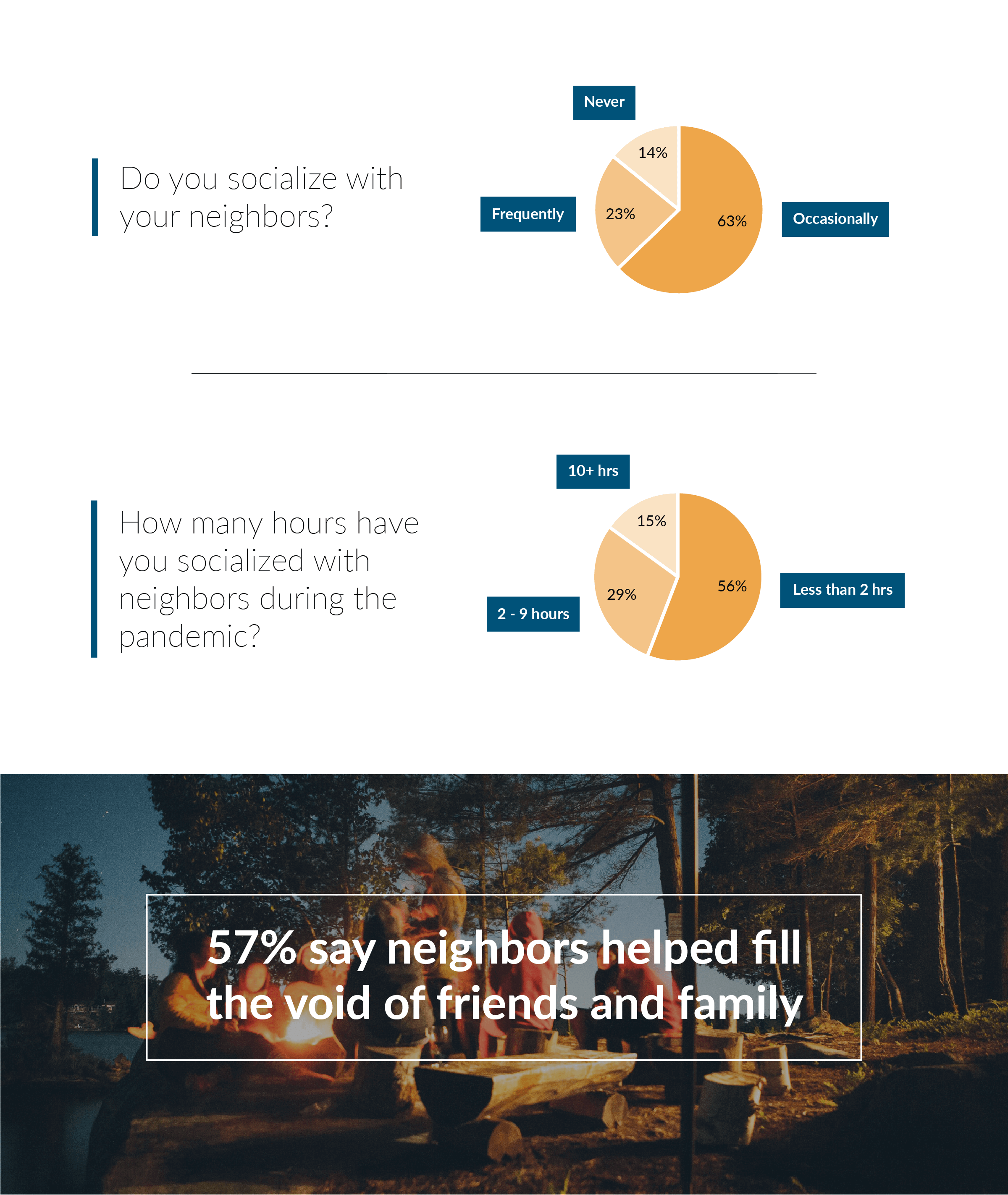 In addition to social trends among neighbors, we found a majority of neighbors are eager to help one another. During the pandemic, 67 percent have offered help of some sort to their neighbors, and 62 percent say they’ve received the same offer in return.

While coordinating a large group of people - or creating a “quaran-team” as they’re sometimes called - can be precarious as we’re all trying to isolate, some have found it both essential and effective during the pandemic. Quaran-team or not, 52 percent of people we surveyed report they have at some point shared a burden or responsibility with neighbors this year. Examples include getting groceries, and caring for children, pets, and plants.

In Sight, On Mind

In normal times, certain on-the-go folks might describe their neighbors as “out of sight, out of mind.” After all, many millions of people leave their house for work most days, have social engagements outside the home, take vacations, etc. But during the pandemic, we’ve all just been squished together with nowhere to go. More than ever in our lifetimes, neighbors are “in sight, on mind.”

This dynamic has mostly come with good results - people are friendlier and more appreciative of each other. But what of the other side of the coin? We asked respondents about unusually high levels of exposure to their neighbors.

Fifty-seven say they’ve at some point been surprised by a neighbor’s routines or lifestyle, based on what they’ve seen or heard. Also, there’s the subject of kids. For anyone who’s spent a few minutes on social media this year, you may have noted the gasping cries of overwhelmed parents without the normal respite of schools and daycare centers. The question is, have neighbors felt any of that pain too?

Apparently not. While 78 percent say they’ve noticed an increased presence of kids in the neighborhood, only one in four were significantly annoyed by it.

On the subject of confinement: we wanted to assess varied experiences people have in cities, where populations are denser, versus in suburbs where there’s more breathing room between neighbors. The table below illuminates those differences. It seems in this case that density makes the heart grow fonder. 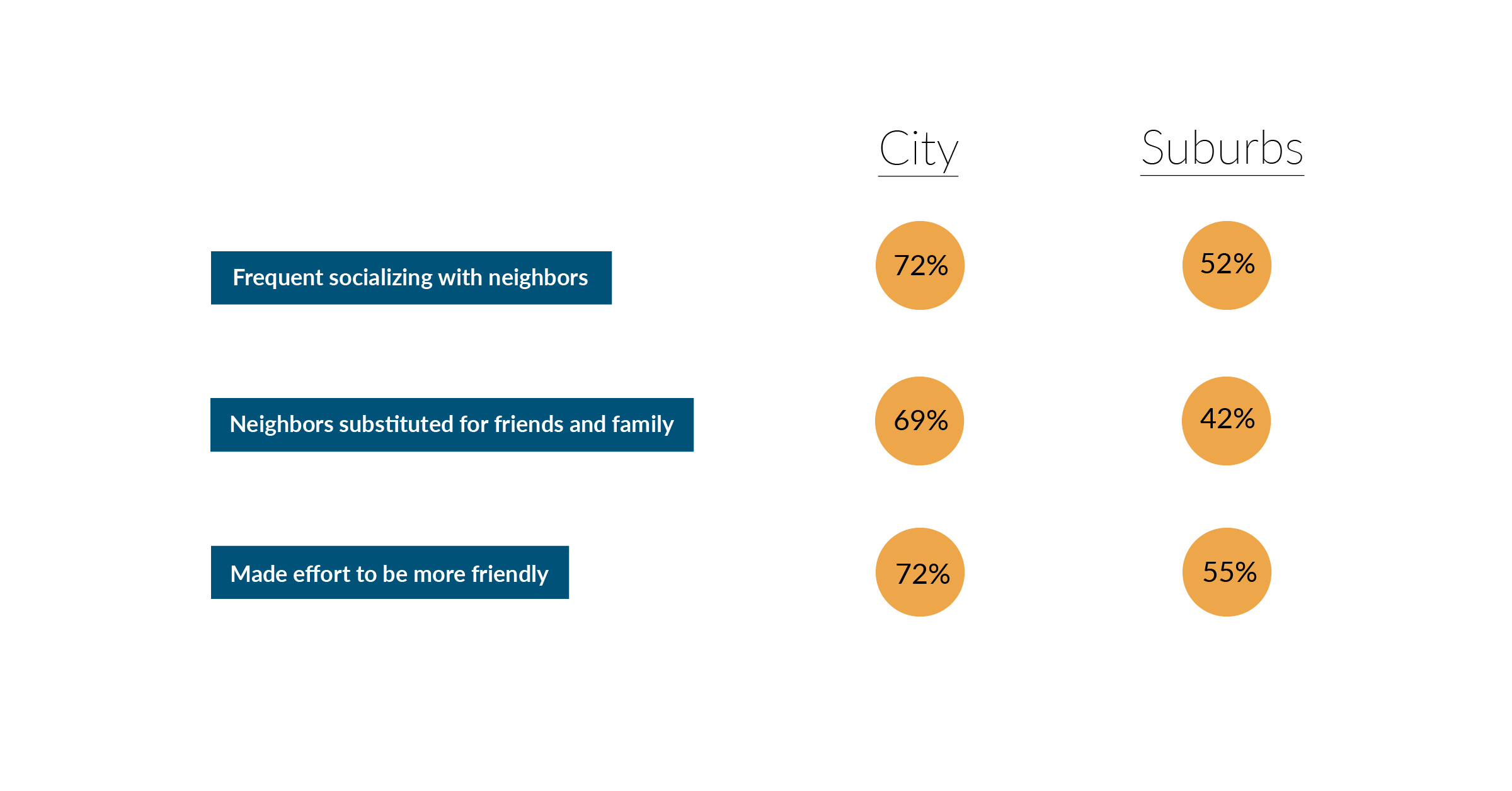 The Friendliest Neighbors in America 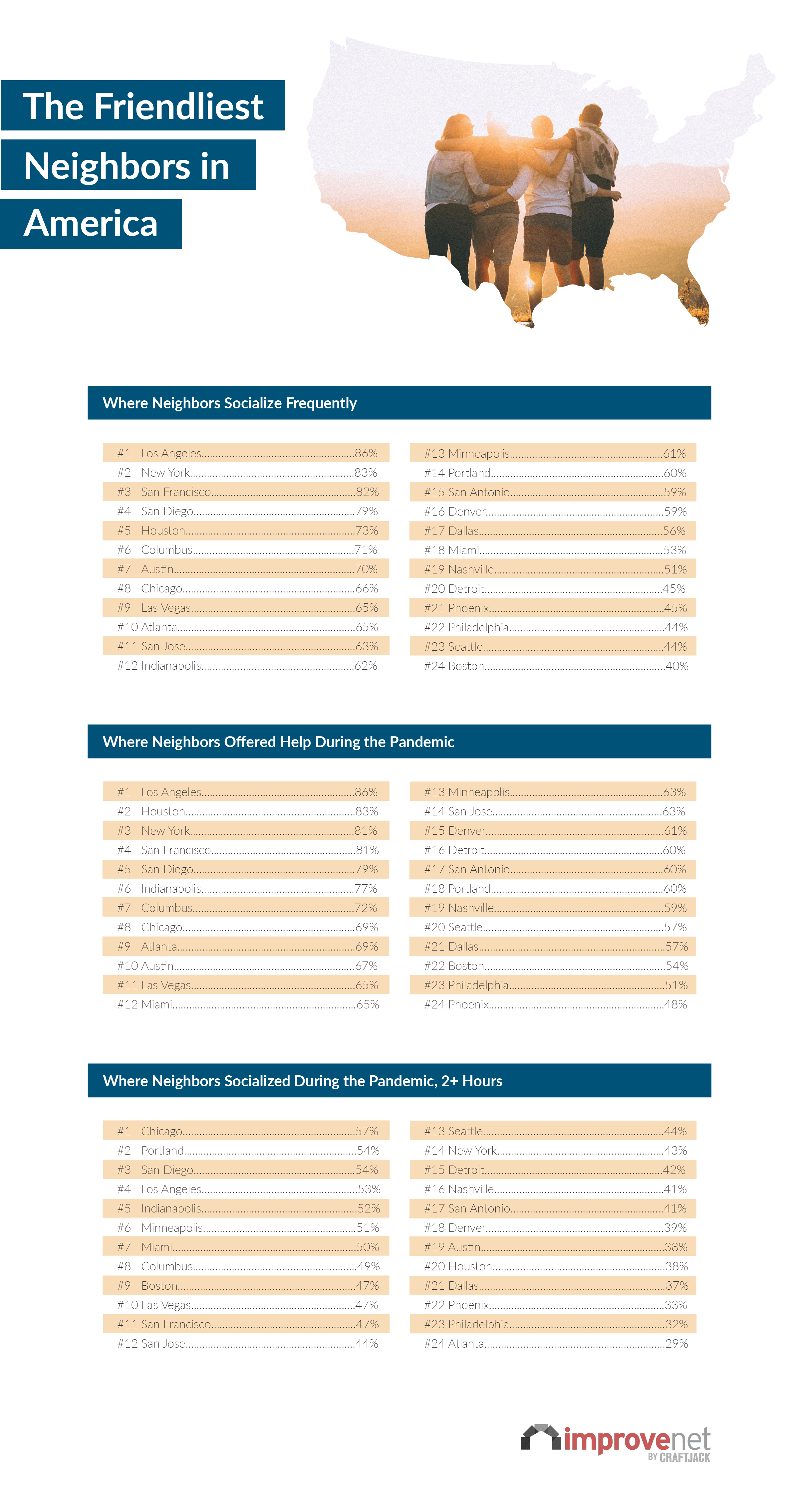 From October 6 - 26, we surveyed 2,500 Americans about their experiences with neighbors both before and during the 2020 coronavirus pandemic. The gender of our respondents was 50 percent female and 50 percent male, with an average age of 38 years old. Fifty-one percent reported living in a single-family home and 49 percent in an apartment, condo, or other multi-tenant complex. Fifty-seven report living in a city and 43 percent in the suburbs or exurbs.

Feel free to use this data and research with proper attribution linking to this study. When you do, please give credit and link to https://www.improvenet.com.

Excited to have the neighbors over?

Make sure to get your place in top shape before you do. Get free estimates on bathroom remodeling, deck and porches, flooring, and more.