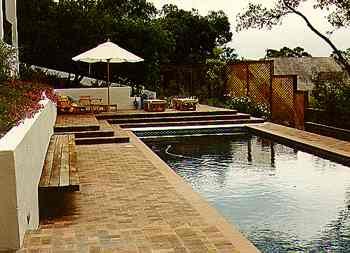 Brick is a terrific choice for a patio. It doesn't only give your home exterior a rustic touch, but brick is very durable. See all you have to know about brick patios below and when ready, use ImproveNet to find brick patio contractors near you.

Mortared patio surfaces must be placed on solid surfaces, namely a concrete slab. Bricks are laid in a half-inch thick bed of mortar that has been smoothed and approximately leveled with a trowel. The bricks should be soaked in a bucket of water for several minutes before placing so they don't absorb water from the mortar. This can cause the mortar to dry prematurely and weaken it. Lay the bricks in the mortar, or mud as it is often called, and space each one with 1/2-inch or 3/8-inch plywood spacers as you work. Place a 4-foot level on top of the bricks regularly to ensure that all are placed flat and level. String lines are also often stretched across the patio at the finished level to check the work. Put down about 3 or 4 square feet of mortar a time, but no more than you can cover with bricks before it gets too stiff. This will be about one hour, or sooner if in a hot climate.

After 24 hours the mortar in which the bricks are set should be dry enough to place the grout. Before kneeling on the bricks, place pieces of plywood on them to distribute your weight. Before applying the mortar, wet the bricks with a fine hose spray. Mix the grout mortar to about the consistency of toothpaste and then use a squeeze bag, similar to a pastry frosting squeeze bag, to place the mortar between all the joints. Compress the mortar in the joint with a joint tool. Remove the excess mortar that squeezes up with the trowel but don't smear it on the bricks, which can stain them. After the mortar has firmed up to where you can just leave a thumbprint in it, tool the joints smooth.

Some publications recommend that mortar be placed between bricks by sweeping a dry mortar mix into the gaps and then soaking the mix. This method does not produce as strong a mortar and the process often leaves the bricks stained with mortar. If you do, you can always stain over the mortar and brick.

Flagstones, saltillos, and other similar paving materials are laid in much the same manner as described above.

If the finished patio or walkway will be inset into the lawn or ground, then a brick edging is not needed. Otherwise, to keep the perimeter bricks from working loose, the patio or walkway should have a permanent edging. The border also gives the project a finished appearance. One edging method is to place bricks on end in a trench around the patio perimeter. Space the bricks and set them so the tops will be flush with the finished patio surface. Fill the ditch with mortar to set the bricks and then use the squeeze bag to place the mortar between the bricks.

Exposed aggregate: Aggregate, or small stones, are embedded in the surface of concrete as an alternative to paving it. The aggregate should be small, smooth and varicolored stones for the best effect. They can be sprinkled randomly on the surface or laid in specific patterns.

Finishing a slab or walkway with exposed aggregate takes some practice to master. It is all about timing. And timing depends a lot on the temperature and humidity. Basically, once the concrete has just lost the watery sheen on top, the aggregate is spread evenly over the slab surface. For large areas, sometimes a retarder is sprayed on the concrete to prevent it from setting up too quickly. After the rocks are dispersed, they are troweled into the concrete until barely visible.

Then, before the concrete has hardened, but is not too soft—remember, it's all timing—the surface concrete around the small stones is washed away with a sprayer. It's a delicate process to wash away the concrete on the surface of the aggregate without washing the aggregate itself away, or leaving it too loosely embedded. An excellent way to control the spray is with a curved watering extension that attaches to the end of a hose. Hold the curved end almost at ground level to deliver a nearly horizontal spray that exposes the aggregate.

For an effect similar to exposed aggregate on an existing slab, smooth, colored stones can be embedded in a clear epoxy or cementitious mix that binds the stones to the slab surface. This is particularly widely used around residential swimming pools. The surfaces are cool, non-skid and easy on bare feet.

An epoxy overlay, sometimes called chattahoochie, is poured over the slab with the aggregate. This mix relies on a chemical reaction between boding and resin agents to give a hard, flexible, clear film layer. Cementitious overlays function in a similar fashion.

As a rule, patio steps are wider and broader than standard residential steps. Patio steps should be at least 4' wide to allow two people to stroll comfortably beside each other and even pause to sit on the steps while they enjoy the surroundings.

The accepted minimum riser height for a patio step is 4 inches and not higher than 7 inches.

Some common relationships between the riser and tread for patio stairs are:

Whatever combination you select, keep all stairs risers the same. A difference of just 1/4 inch is readily detectable when walking up stairs and may cause someone to stumble. Additionally, if you have more than one set of stairs in the yard or connecting to the house, all stairs should have equal riser heights even if the tread widths vary.

The variety of styles and materials for garden and patio steps is almost limitless. They can be brick, stone, railroad ties, or a combination. Steps can be even a series of differently sized descending patios, which again create "rooms" that are separate yet still linked.

Because sloping earth, especially when wet, can exert significant pressure, retaining walls should not be higher than 4 feet. If you do need a higher wall, either a structural engineer or a qualified landscape architect should engineer it. The risk of a wall collapsing and injuring someone is not worth taking.

Groundwater should not be permitted to build up behind a retaining wall. Mortared brick or stone walls should have weep holes along the base at regular intervals to allow groundwater a way to pass through. Loose stone walls do not need specific weep holes because water will pass through openings between the rocks.

In particularly wet areas, a drain line behind the retaining wall near the base is advisable. This ditch, with a gravel base and perforated pipe sloped to carry the water away, will help prevent water and saturated soil from pushing a wall out of line or collapsing it.

All retaining walls should have a firm foundation to minimize problems associated with earth settling beneath a wall, which can destabilize it and crack the mortar. Large rocks set in the ground make good footings for a stone wall, but brick or concrete block walls should have a concrete footing under them. If you live in areas where the ground freezes, the wall foundation should be placed below the frost line. Your local building inspector's office can tell you what that depth is.

Stone or masonry retaining walls can be stacked or mortared in place, which is more stable. If a retaining wall is formed by rocks are stacked against an earthen bank, the bank should be angled back several degrees so the wall leans against it.

When planning a retaining wall, let it flow with the natural curves of the land when possible. Following the topography not only breaks up the boredom of a straight wall, but results in little promontories and niches that make natural and inviting seating areas.

Back To Top Of Page

Back To Top Of Page
View All Articles→