Where Millennials Own Homes

Things like student debt, loan scarcity, and high costs of homeownership—whether its remodeling costs or unexpected repair costs—can make owning a home feel out of reach for many millennials. While critics accuse the millennial generation of ‘killing’ the housing market, there are plenty of cities across the country in which the opposite proves true.

Which cities have the highest rates of millennial homeownership? Using US Census Bureau data, we analyzed more than 170 cities nationwide with populations of 150,000 or more to find out.

Nationwide, millennials make up roughly 11 percent of homeowners in cities with populations over 150,000 – but in Clarksville, Tennessee, that average more than doubles to 23 percent, making it the city with the most millennial homeowners in the country. Grand Rapids follows closely with 19.5 percent and is trailed by Sioux Falls (18.2%), Minneapolis (16.7%), and Atlanta (16.4%) to complete the top five cities with the most millennial homeowners. 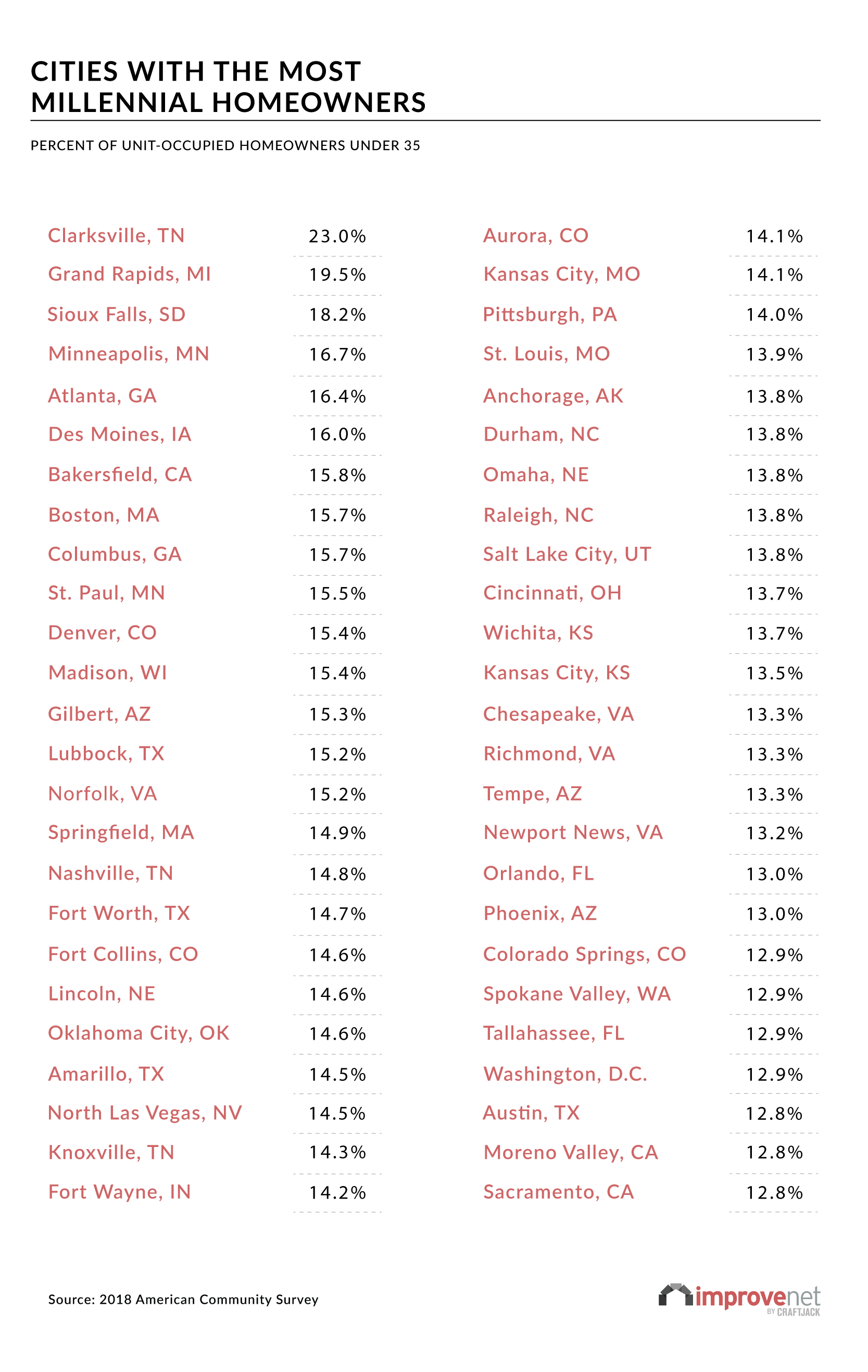 It’s rare to find a millennial that’s both a homeowner and single. On average, they make up just two percent of homeowners nationwide. But in cities like Atlanta and D.C., millennials buck the stereotype and are twice as likely to buy a home. Over 6 percent of Atlanta’s single millennials are homeowners; Washington, D.C. follows closely at 4.9 percent, while Boston (4.3%), Tempe (4.3%), and Pittsburgh (4.2%) make up the top five.

Alongside Frisco, Texas, three California cities – Fremont, Oxnard, and Santa Rosa – are among the five with the smallest single millennial homeowner populations with just 0.6 percent. Hialeah, Florida, has the smallest, at 0.5 percent. 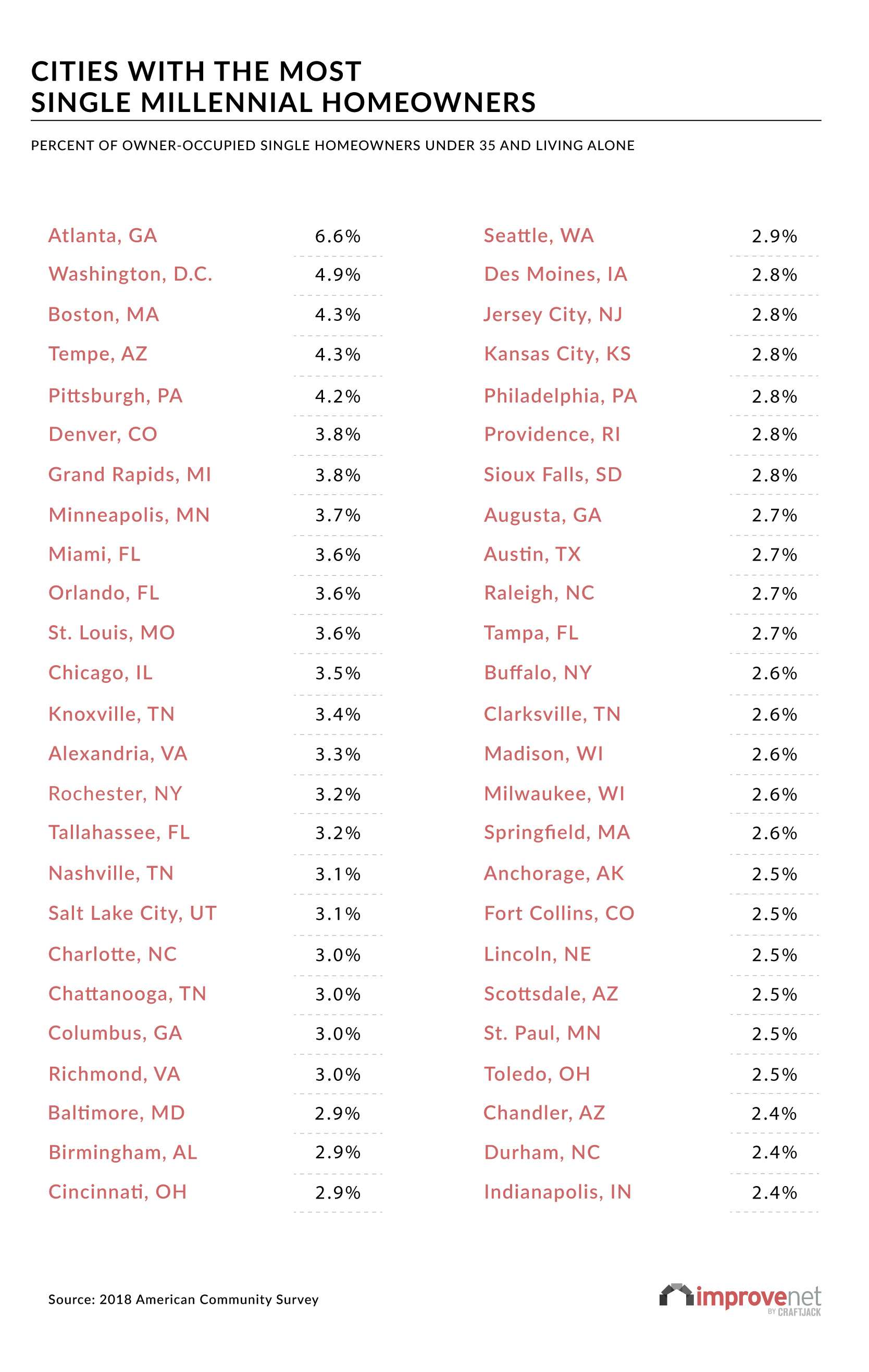 For many, owning a home and having a family represents the quintessential American dream. However, only 6 percent of homeowners represent millennial families. When they do set down roots, these families are most likely to live in Clarksville, Tennessee, where they make up over 15 percent of homeowners, followed by Sioux Falls (11.5%), Gilbert (10.7%), Grand Rapids (10%), and Bakersfield (9.7%).

With just over 2 percent of millennial family homeowners each, Fort Lauderdale, Hialeah, and Detroit are home to the least. 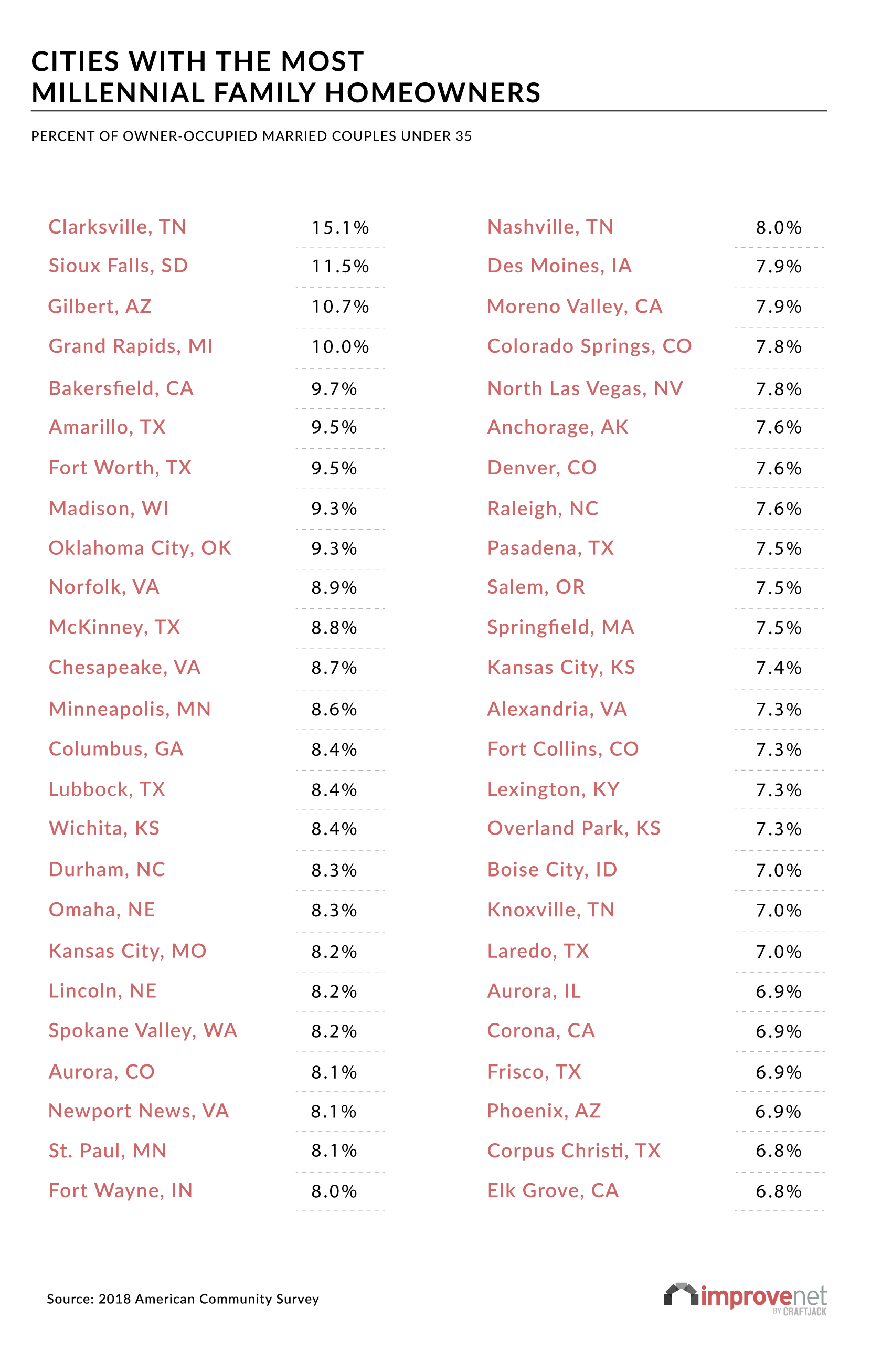 According to our research, millennials looking to become homeowners should consider heading south, where almost half of the cities on the list can be found. Cities in Southern states are home to the highest concentration of millennial homeowners, including those with families and those that are single. On average, millennials make up 15 percent of homeowners in Southern cities that made the list – more than the national average of 11 percent.

Using the 2018 American Community Survey, the most recent data available, we looked at the occupancy characteristics and demographic characteristics for occupied housing units in cities that have 150,000+ residents; there are 173 such cities.

Feel free to use this data and research with proper attribution linking to this study. When you do, please give credit and link to www.improvenet.com.