How Much Does it Cost to Repair a Glass Shower Door?

Most homeowners spend between $133 to $205 nationally.
Get free estimates from local contractors who can Repair a Glass Shower Door. 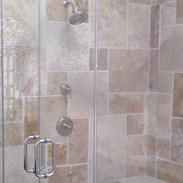 When a fancy glass shower door starts hanging to one side or leaking water while someone is relaxing in the tub, it's time for a repair. Glass shower door repair costs vary depending on the nature of the issue that needs to be fixed, so use this simple guide to figure out how much to save up for the work.

In most cases, homeowners don't have to pay for someone to come figure out what the problem is. They can choose an appropriate repair service, but it's important to remember that people often save money by having an estimator do the job on the spot if the issue is relatively minor. Most homeowners pay an average of $269, but some have reported repair costs as low as $80 or as high as $600.

How do we get this data? This info is based on 763 cost profiles, as reported by ImproveNet members.

When glass shower doors leak, it's usually due to issues with the caulking or gasket seals around the edges of the doors, tracks and panels. Although the cost of replacing such parts is usually minimal, a repair technician may have to do more work if the leak has been neglected for a while.

Leaks left unattended allow water to creep behind tile where it penetrates drywall and other building materials. This can lead to significant mold growth or moisture damage that may require extensive repair work. These jobs are generally more expensive, but they're essential for stopping the spread of damage.

Although shower glass is usually very durable, it can still get scratched or chipped and lose the modern appearance that people enjoy. Most homeowners deal with these issues by hiring someone to buff out or fill in the defects, and this route is much less expensive than having the entire glass panel replaced. These processes may require hazardous chemicals or the use of grinding power tools that generate dangerous silica dust, meaning that they're generally too risky for most DIY enthusiasts.

Some shower door repair jobs are relatively simple; doors that squeak or drag when they're opened and closed can often be fixed with a basic realignment. Adjusting the clamps that hold a frameless door panel or re-leveling the track runners that it slides on are fairly straightforward jobs, but they may require the partial or complete disassembly of the shower enclosure.

Because misaligned doors are usually too heavy for a single homeowner to fix alone, it's best to hire a contractor for these repairs. If they drop the glass, their insurance will cover the replacement. In addition, they may not charge for subsequent repairs if the problem persists because they misidentified the root cause.