Most homeowners spend between $147 to $239 nationally.
Get free estimates from local contractors who can Repair Home Theater Wiring or Components. 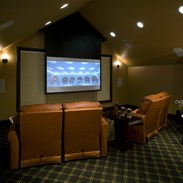 How do we get this data? This info is based on 801 cost profiles, as reported by ImproveNet members.

The most common repair that many homeowners need to have done with a home theater system is that of repairing bad wiring. Rodents living within the walls may chew up the wires over time, or they may simply go bad on their own. As a result, in order to access the wires and repair them, walls may need to be cut into. For this reason, such home theater repair is generally not recommended as a DIY project. Instead, it is best to call a professional to repair the wiring or any other components of the home theater system that have gone bad.

Many home owners assume that, because the repair involves cutting into the walls, that such services would be very expensive. As a result, they end up leaving their home theater systems in disrepair. What many home owners do not realize, however, is that the average home theater component or wiring repair costs under $200. In most cases, the price is closer to $150.

Of course, there are many different factors that can influence the actual cost of the repair. Some of these include how much of an access problem exists when it comes to reaching the wires and how severe the problem is. For example, it is less expensive to have one wire replaced than three or four of them.

Finally, the age of the home theater system being repaired can influence price as well. Older systems tend to require parts that are more rare to come by and are thus more expensive. Still, homeowners can expect to spend under $300 on such repairs.

Then again, wiring is not always the problem. It could be the antenna or other outsid elements.