Most homeowners spend between $450 to $1,019 nationally.
Get free estimates from local contractors who can Install New Plumbing Pipes. 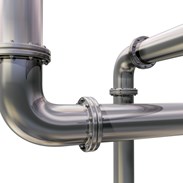 There are several major reasons that you may need to install new plumbing pipes in your home. New construction will need its very first set of pipes in order to provide running water for residents. Homeowners might also replace the existing plumbing in a home in order to renovate the space and change the layout, or they may need to replace the pipes because of corrosion. This guide explains the average costs of professional pipe installation.

How do we get this data? This info is based on 3673 cost profiles, as reported by ImproveNet members.

When homeowners learn that they need to add new pipes or replace the existing plumbing in their home, they first thing they want to know is the total cost of the project. Replacing pipes is typically not a job that can be done as a DIY project, so you should bring in a professional, licensed plumber to handle the job. While the costs can vary substantially from home to home, expect to pay anywhere from $2,165 to $3,110 for this service.

Cost of Demolition and Pipe Removal

If you are replacing existing pipes, it is important to remember that there are also costs involved with removing old plumbing before new pipes can be installed. If you are replacing pipes in the bathroom or kitchen, for example, you may have to remove cabinets or cut holes in the walls to take out the old, corroded pipes. This can be a project as affordable as $200 for the removal of a single cabinet, or it can be a bigger job that includes drywall repair and typically costs upwards of $1,000.

Along with the costs of any necessary demolition, installing plumbing pipes can vary so much in price because of several major factors. First is the size of the project or the home because replacing more pipes is naturally more expensive than just replacing one or two. In addition, the material used for pipes is an issue. PEX is easiest to install because of its flexibility, but more expensive copper pipes will generally last a lot longer without the need for repair or replacement.