If you had to describe each state with one characteristic, what kind of words would come to mind? Do you think of the high cost of living when you think of California. When you think of Alaska and North Dakota, do you instantly think of the cold? With each state comes its own unique traits and features that can often be simplified into a single adjective. To obtain a better understanding of what people think about each state, we turned to Google Search Suggestion to see what the majority of Americans are searching.

For those unfamiliar with Google’s version of autocomplete, it is important to note how these things work. According to Google Support, as you type something into the search bar, other popular related searches will pop up. For example, if you were to type in "Oregon," the search suggestions would be "ducks" and "football." As Google Support explains, the autocomplete suggestions come from algorithms created from the number of times people have searched for a particular word or string of words. Basically, Google searches help connect you with what everyone else is searching for as well. Based on these results, we were able to create a snapshot showing what Americans think when your state first comes to mind. 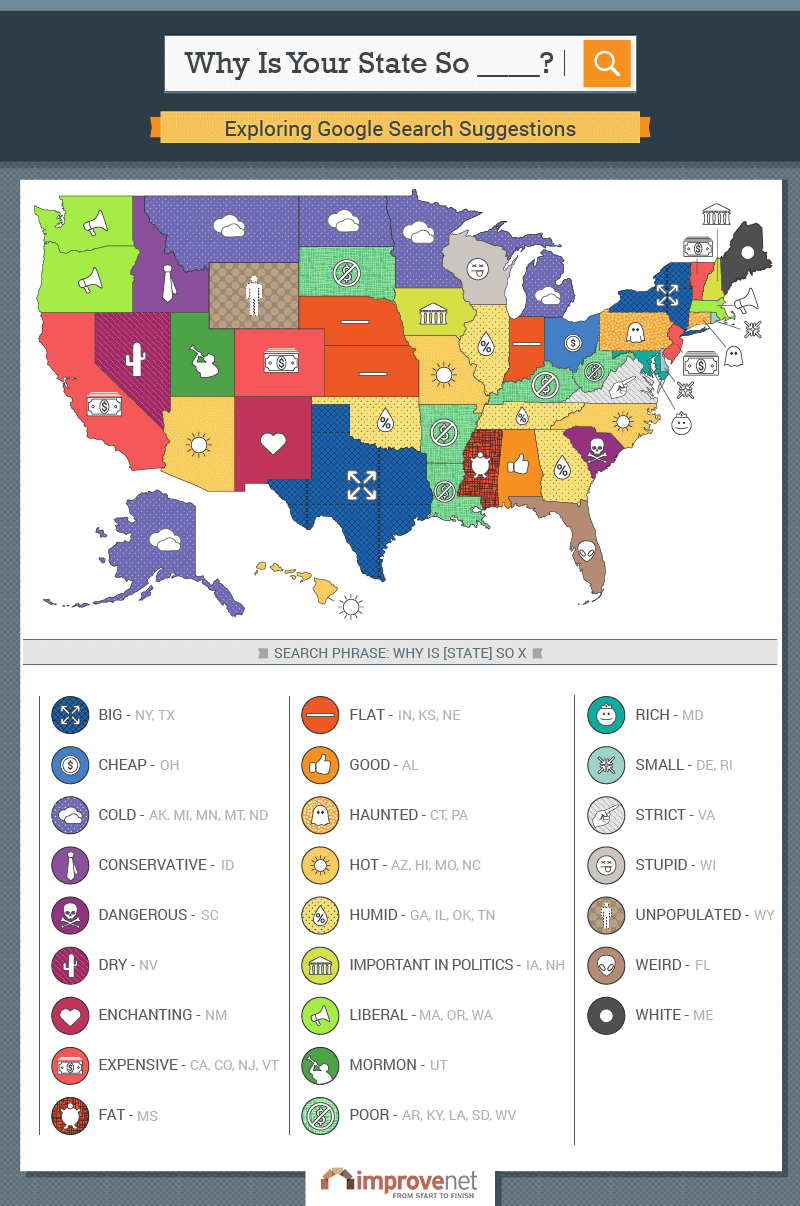 Looking at the country in the form of "Why is your state so…" brings a whole new level of understanding to the diversity in our country. Have you ever wondered why Washington, Oregon, and Massachusetts are so liberal? One of the main reasons these states are perceived as particularly liberal may have to do with their seemingly liberal marijuana laws: Marijuana is legal for recreational use in both Washington and Oregon, and it’s also legal in Massachusetts for medical use.

Why is Florida so weird? A quick Google search reveals that there are hundreds of people who are apparently aware of Florida’s reputation as being one of the (if not the) weirdest states. Though "weird" is not something that can be accurately measured, reading news stories like people calling 911 for chicken wing delivery makes it quite clear why Florida is known for its quirkiness. 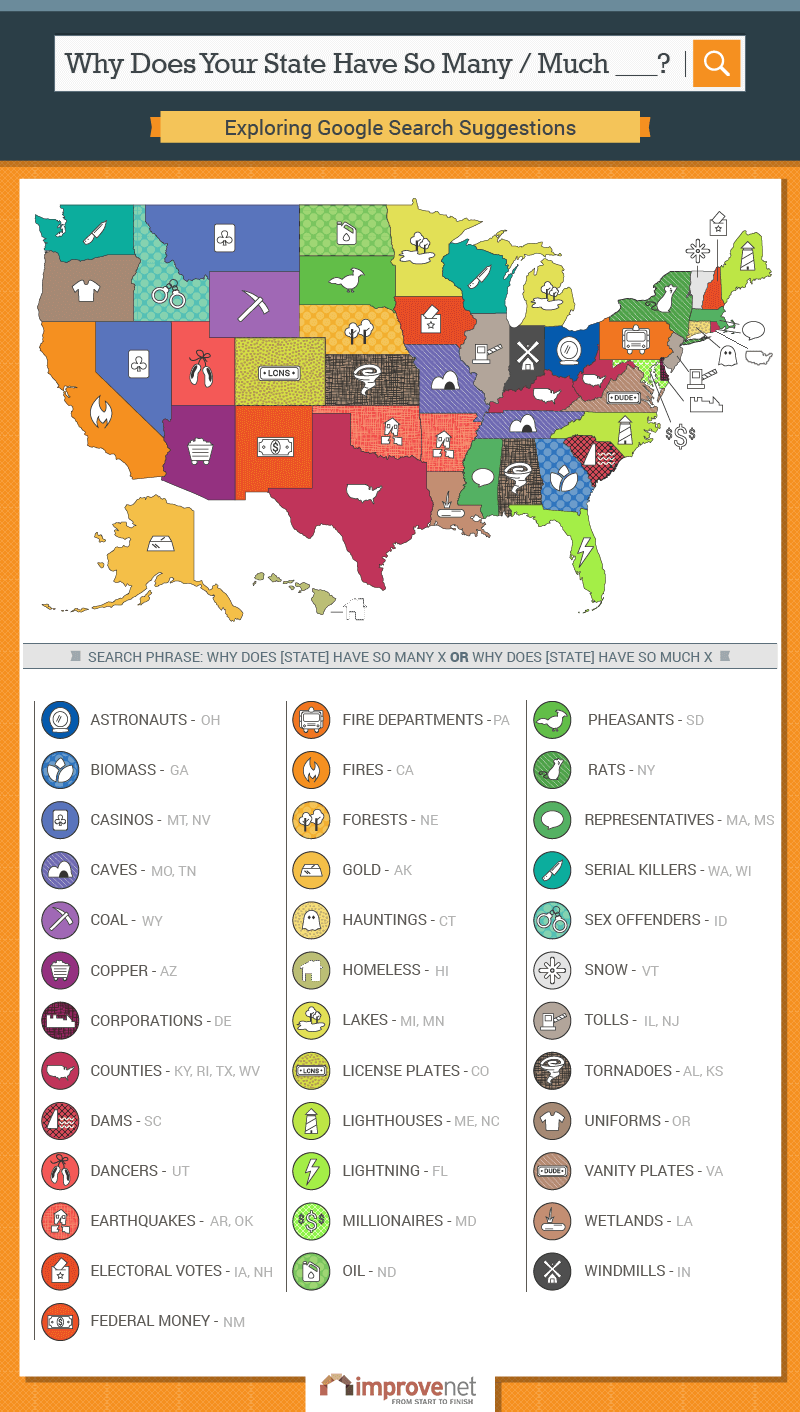 Another popular question when it comes to your state’s reputation is, "Why does my state have so many…?" If you live in New York, you might be interested in researching why the state is home to so many rats. Though highly populated cities and states often have rodent issues, it is safe to assume that New York has such a reputation because of factors like its high population and intricate sewer structures. Instances such as a 2007 rat infestation at a Kentucky Fried Chicken/Taco Bell or this year’s YouTube star "Pizza Rat" are clear indicators that rats are alive and well in New York.

Though the results are fun to hypothesize about, a few states have disturbing results. Idaho’s most searched result is "sex offenders." Though it is unfortunately true that there are sex offenders in most areas of most states across the country, Idaho has much stricter laws than many states. Under the Sexual Offender Registration Notification and Community Right-to-Know Act that was established in 1998, sex offenders are required to register for the rest of their lives, regardless of how long ago their crime was. Though this law is controversial, it does increase the number of sex offenders in Idaho versus other states where the laws are less permanent for sex offender registration.

Serial killers crop up in searches for Washington and Wisconsin. Why? Each state happens to have some pretty famous serial killers calling it home. Wisconsin was the home of Jeffrey Dahmer as well as Ed Gein, who inspired some of the most famous horror movie characters including "Psycho," "The Silence of the Lambs," and "Texas Chainsaw Massacre." According to The Seattle Times, Washington tells a similar story. Among the serial killers who have hailed from Washington are the Green River killer (Gary Ridgway), Ted Bundy, the D.C. sniper (John Allen Muhammad), and Robert Yates, Jr. Though Washington and Wisconsin may not necessarily have more serial killers, the names coming out of these two states happen to be incredibly infamous. 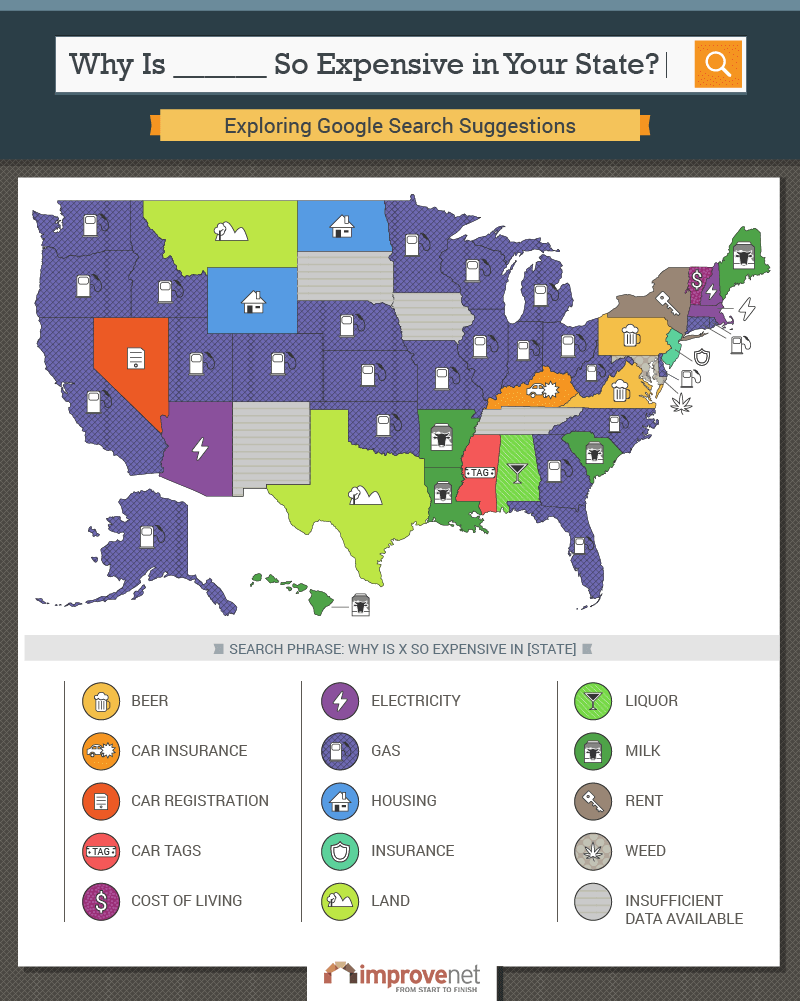 It’s clear that "gas" dominates the Google results for "Why is __ so expensive in your state?" While gas seems like a pretty standard expense for most people, regardless of which state you live in, gas prices also fluctuate so often that it’s not surprising that people search for a solid reason as to why. Besides gas prices, many of the other results have to do with automobiles – car insurance, car registration, car tags – but there are a few alternative results that stand out. Maryland’s top Google search for "Why is __ so expensive" is "weed." Similar to alcohol costs, marijuana prices really depend on the region you live in. Maryland is fairly strict with marijuana laws, which makes marijuana a bit pricier than in other states. 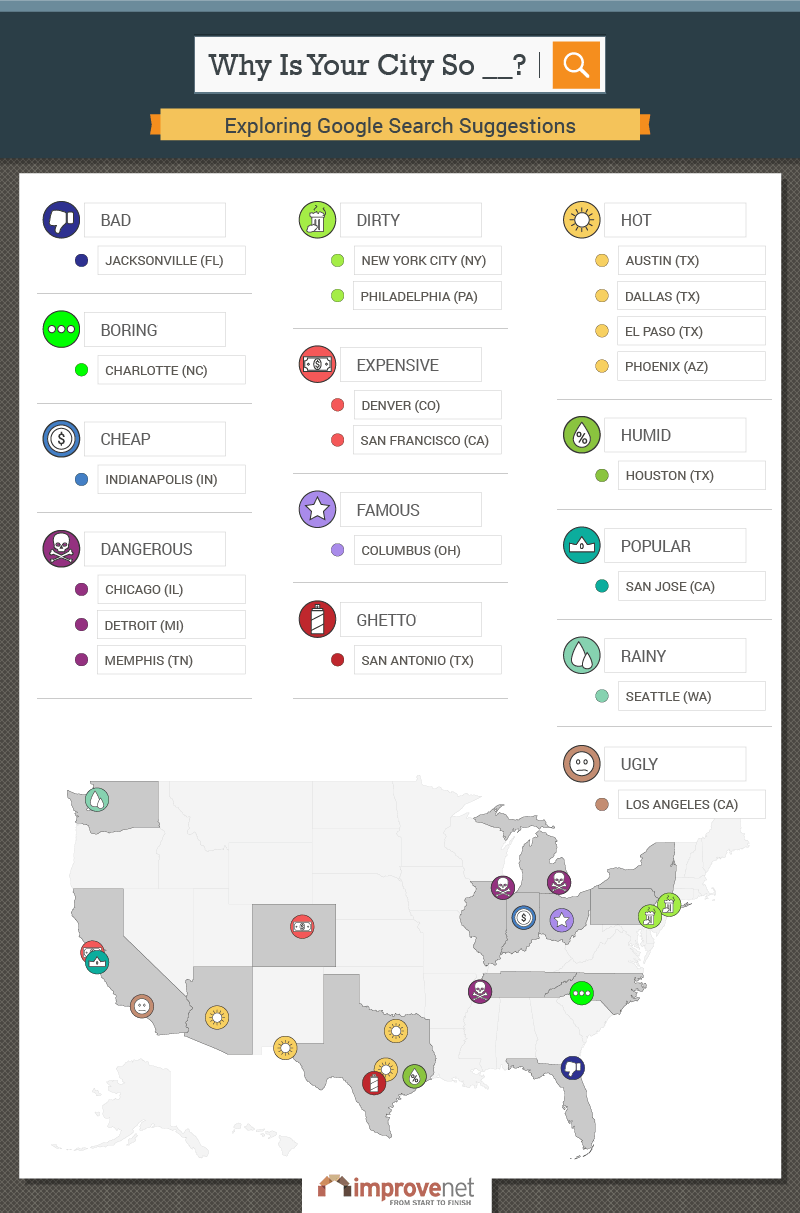 When documenting Google results for the question "Why is your city so..." there are some interesting, and sometimes similar results. Many of the results have to do with the climate–humid, hot, rainy–while others relate to safety. Chicago, Detroit, and Memphis are most often associated with the word "dangerous," something that is attributed to not only each city’s reputation but to theirhigh crime rates. Detroit has been ranked as the most dangerous city in the country numerous times over the past ten years.

Expenses, interests, hobbies, and curiosities all vary drastically from one state to the next. Though the Google Search results across America present a general glimpse into the people and the culture of each state, it is important to note that what people are searching for does not define a state’s entire population. In addition to the interesting results of this study, there are, of course, other aspects to each state’s culture. Whatever burning questions you may have about the state you live in or are interested in, it’s nice to know you can always Google it!

Feel free to share the images found on this page freely. When doing so, please attribute the authors by providing a link back to this page, so your readers can learn more about this project and the related research.